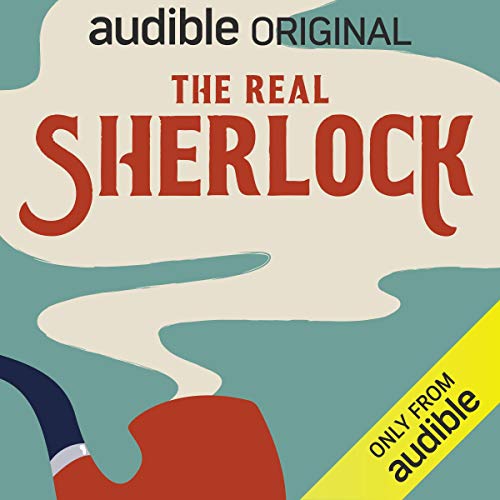 What listeners say about The Real Sherlock

honestly whoever edited this series should find a different job.. half of each episode is made up of clips of what we are about to hear ,what will be in the next episode, introduction and credits and unfortunately whats in between is very weak with little substance.

This series has too much repitition of the same facts. We'll hear snippets at the end of one episode as a trailer to the next. That is then repeated at the top of the next episode as a preview to what's to come and finally we hear it in context, by which time one is so familiar with it one can repeat it along with the broadcast. This also means that valuable time where new info and insights could be aired are not forthcoming.

The first episode has the 'exciting' moment where the inkpot Doyle owned is brought out. It's not described or given any significance or even referred to again. It's a dull moment that is unconvincingly whipped up into something that the presenter calls 'exciting' with a lack of conviction that's almost farcical

Truly significant moments in Doyle's life, his decision to resurrect Holmes, his work on real cases of injustice, his hatred of his character are speedily glossed over resulting in a thumbnail which has no illuminating quality.

It is however entertaining to see how many clichés the presenter can squeeze into her linking narrative.

In short, a disappointing shallow series made all the more frustrating because the source material offers so many opportunities that none of the production team exploit.

There are a huge number of people who love the Sherlock stories (me amongst them) and so there will be lots of interest in a series that reveals the back story on his development. This is not it. Apart from some vacuous gushing over Conan-Doyle's nightshirt, the rest of the content are some bland platitudes from actor Bill Patterson and a cosy chat with two of Doyle's descendants. I am searching my mind as to whether I learned anything at all about Sherlock from this.

If this had not been free, I would have sent it back.

We don't need to hear the same clips 3 times, particularly for such short episodes.

Not enough of real interest here. Lots of repetition in the form of 'what's coming up' in the next 1/2 hour. Would have made a reasonable hour long program with careful editing.

I listened to 95% but can tell you this is very dull. It's very shallow and not very informative at all. Very poor effort on this production- glad it was free!

good for passing the time

I was expecting so much more! For such a literary genius, the content is actually quite disappointing.

I listened to two episodes and I think that was quite enough.

Great subject matter but tediously repetitive. Each episode told you what it would tell you, told you it, repeated it, then repeated it some more. Pandering to a market with a short attention span perhaps?!

Fascinating insights into Cohen-Doyle however there is only about one episode worth of interesting material, the rest of the series is filler and repeating what has already been said. While listening to the last episode I had to double check twice I wasn't listening to an earlier episode given the amount of repetition.

This was one of the better Audible Originals. A biography of the famous author done in an interesting format. The narrator talks with actual family members who share stories inter-sped with the story of his life, works and friends. The highlight of course is the creation of Sherlock Holmes, his inspiration and struggle to get his tales published. Actors read selected highlights of his works at appropriate times as well as highlights from his extensive diaries. Entertaining, a nice overview of his life. The actor reading his works, Charles Edwards, wasn't my favorite, his reading didn't really make the work stand out for me. That is difficult, since after seeing Benedict Cumberbach and Martin Freeman.

I learned a lot from this podcast. There were some things that were lost in an audio format because they were visual (like when family members showed items that Arthur owned, or the infamous forged fairies photograph), but otherwise it was educational.

I didn't know ACD's story The Lost World was the inspiration for Jurassic Park! I should put that on my TBR.

This is a quick and informative biography of Sir Arthur Conan Doyle. What I liked most about it was the biographer’s decision to delve into Doyle’s Professor Challenger character and not just the more famous Sherlock Holmes. A significant amount of time is also spent on Doyle’s obsession with spiritualism—something that often surprises people who expect Doyle to be more like his character Sherlock. If you’re looking for a very quick look at a famous author’s life, this is an enjoyable one.

I found this to be really interesting and full of things I did not know such as Jurassic Park stemmed from a story by Arthur Conan Doyle called The Lost World. I liked how there were interviews by various relatives, some original Arthur Conan Doyle interviews, etc. That really added to the story to make it fuller.