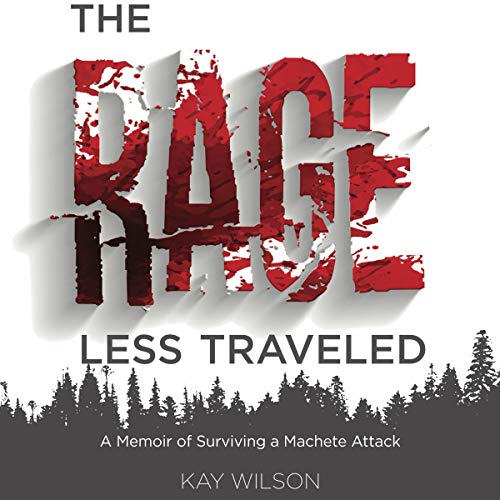 After being brutally hacked at with a machete multiple times and with her friend murdered in front of her eyes, Kay Wilson somehow managed not only to fool her attackers and play dead, she rose to her feet, gagged, and bound, and bleeding to death, staggered barefoot for over a mile. A harrowing and unfathomable ordeal, this book might have been one that people are afraid to pick up. Instead, The Rage Less Traveled is impossible to put down. Most surprisingly of all, it is peppered with an appropriate absurd hilarity. The Rage Less Traveled is as much about humanity as it is about the evil that tries to destroy it. It depicts the defiance of the human spirit to get through the impossible. The Rage Less Traveled is a sobering yet blistering listen that is as much about hope as it is about hell.

Narrated by the author, Kay Wilson.

What listeners say about The Rage Less Traveled

excellent and tragic. not a happy ending story.

not a happy ending story, a realistic and brutal one. a challenging and unforgiving account of trauma and the struggle to move on

I’m so traumatized by what is happening to the Jewish people and all others by brutes and bullies. I personally don’t understand how these people and others like them can live with themselves and go on. They do, though. Never to have a change of heart, usually. God knows. The pain caused and blood shed will be avenged. That is the only truth worth holding on to in all this.

Amazing story of survival and perseverance

We rarely get to hear directly from a survivor of a terrorist attack. Kay’s narration of the book made it infinitely more powerful. Kay takes you through it all; from getting attacked by palestinian terrorists, seeing her friend murdered before her eyes, miraculously surviving, to her ongoing and sometimes equally agonizing recovery process. And of course, no Jewish story is complete without snippets of Jewish humor.

What can I say?

This is the most important read of a lifetime. I know of Kay and of her story. The amount of pain she went through is unbearable and inspiring. We sail through life sometimes and take things for granted, Kay who has been to hell and back doesn’t. She is my hero. My inspiration.

Kay’s narration of this intense, personal story is heartbreakingly beautiful. Her words illuminate two of the most precious souls to have ever lived. Her own and her friend, Kristine’s.

**A MUST READ!!** Emotional, Horrifying, Heroic

I have heard this story before and yet could not manage to hit the pause button! I listened to the whole book in just one day. Hearing this book in the authors voice is so moving and so much more powerful than reading it on a black and white page or by a narrator. Kay's moment by moment description of the attacks really draws you in to the horror and fear of that dreadful afternoon hike. I traveled with her down the thorny rocky trail wishing for someone to turn around and see us and cried with relief as help arrived even though healing was much further away. One unexpected aspect of this book is the information gained about PTSD from Kay. Her ability to vividly paint a picture a person with PTSD experiences and the emotional trauma they go through is like nothing I have read before. It was so detailed and helped me understand what many of my friends have experienced. I never thought I would learn a first hand account of PTSD and the struggles of living with it. Thank you Kay for your heroism. Thank you Kay for standing up against the terrorists who hate and kill just because they identified you and Kristine as Jews. Thank you Kay for never giving up and for always being a fighter. From that day outside Jaffa Gate I knew you were a fighter. I know your life will never be the same, but thank you for standing up for those who no longer have a voice, who don't have your strength or ability to speak. You are MY hero Kishkush....