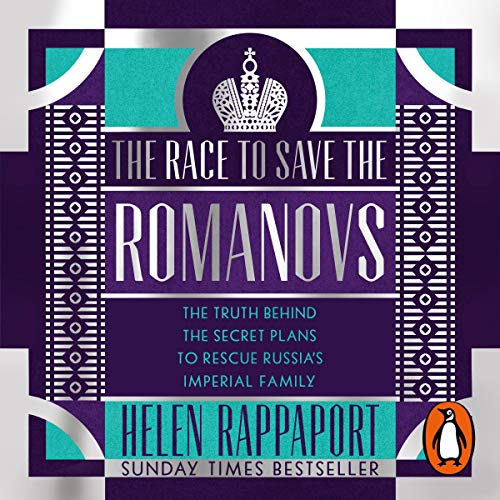 The Race to Save the Romanovs

By: Helen Rappaport
Narrated by: Damien Lynch
Try for £0.00

A major new work of investigative history that will completely change the way in which we see the Romanov story. Finally, here is the truth about the secret plans to rescue Russia’s last imperial family.

On 17 July 1918, the whole of the Russian imperial family was murdered. There were no miraculous escapes. The former Tsar Nicholas, his wife, Alexandra, and their children - Olga, Tatiana, Maria, Anastasia and Alexey - were all tragically gunned down in a blaze of bullets.

On the 100 year anniversary of these brutal murders, historian Helen Rappaport set out to uncover why the Romanovs’ European royal relatives and the Allied governments failed to save them. It was not, ever, a simple case of one British King’s loss of nerve. In this race against time, many other nations and individuals were facing political and personal challenges of the highest order.

In this incredible detective story, Rappaport draws on an unprecedented range of unseen sources, tracking down missing documents, destroyed papers and covert plots to liberate the family by land, sea and even sky. Through countless twists and turns, this revelatory work unpicks many false claims and conspiracies, revealing the fiercest loyalty, bitter rivalries and devastating betrayals as the Romanovs, imprisoned, awaited their fate.

What listeners say about The Race to Save the Romanovs

This is a really interesting account of the last days of the Romanovs, which seems to have a lot of new research and gives a thorough overview of previous historiography and the new information and perspective Rappaport is bringing.

I think from now on though, I'll be sticking to physical history books, as judging from this they don't lend themselves to audiobooks very well, It's incredibly difficult to keep track of the hundreds of different figures who come into play throughout, particularly with a lot of unfamiliar Russian names, so I found myself lost fairly often and unable to just skip back a few pages to find something as I would normally. It can also be kind of hard to tell exactly what is a quote from another source and what isn't when you can't see it on a page.

As someone else has also mentioned, there are a lot of weird long pauses which is disruptive and annoying. I would imagine this isn't the fault of the narrator who presumably just recorded things in chunks, but some sloppy editing that really could have been picked up on and improved very easily.

Overall, if you're interested in the Romanovs/Russian Revolution go for it, just buy a physical copy!

.... and not just to save the Romanovs! A thrilling story marred by a poor narrator - disjointed pauses, unnecessary foreign accents when naming locations and mispronounced names.

very good, one of the better books

Puts the international politics, diplomacy and the families own position at the centre of the failure to get them out of Russia. Honest conclusion as well, no one country, government or individual is blamed for not taking action, on like some other silly romatisied theories!

Buy the book not the audio!

It was interesting to hear all the details about the murder of the Russian royal family. In particular it shows the action of King George in a different light