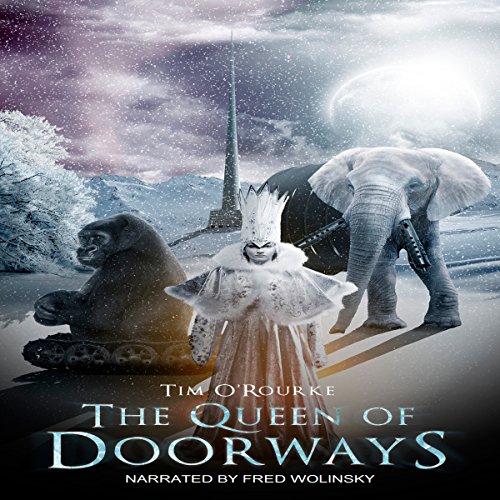 The Queen of Doorways

By: Tim O'Rourke
Narrated by: Fred Wolinsky
Try for £0.00

Trapped by the Delf and her legion of dead-peacekeepers, Zach Black and his friends realize that one of them is a traitor...but who? With the vampire, Neanna Cera, suddenly missing, suspicion soon falls on her.

With a werewolf and mechanical man at his side, Zach Black, must put his trust in two strangers to help him escape. But one of these strangers carries a device that can open more than mere doorways and is the biggest threat to Endra and Earth, should it fall into Throat's hands.

With the Queen of Endra now awake and slowly regaining her powers, it falls to two werewolves, Wally and Willow, to get her safely to the Snowstorm Mountains. But with Endra overrun with entangled creatures that Der Cribbot brought from the world beyond the doorways, will Zach Black need to destroy them or save them to decide the fate of two worlds?

The Queen of Doorways book three in the number-one best-selling Doorways Saga series.

What listeners say about The Queen of Doorways

I read all 3 books twice . I live the fact that the narrator did all the voices for each character . When is the 4th coming.
All some !!!!!

Something to compare other books to.

Wasn't a bad series, just not to my personal liking. It was fairly well written and had some original material. Not a bad read. A good way to cleans you palette of you recently read something you totally dislike.