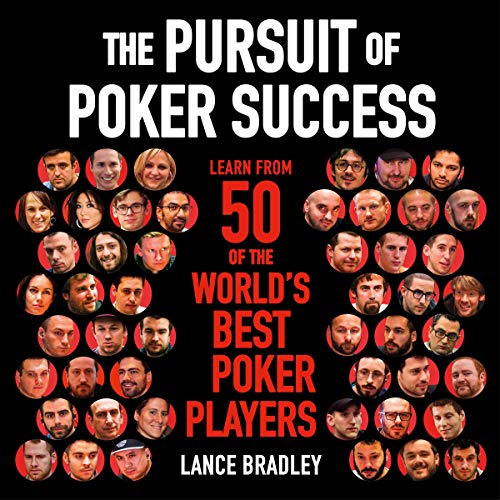 The Pursuit of Poker Success: Learn from 50 of the World's Best Poker Players

Over the last 12 years, Lance Bradley has been one of poker's leading journalists and now finds himself at the helm of PocketFives.com as president and editor in chief. During his time covering the poker world, Bradley has interviewed hundreds, if not thousands, of the world's best players. This experience has revealed one fascinating trend: Contrary to what might be expected, there is no single guaranteed path to success.

Each and every poker player featured in The Pursuit of Poker Success has taken his or her own route to becoming one of the world's best players. The players interviewed for this audiobook include World Series of Poker bracelet winners, World Poker Tour champions, online poker wizards, and some of the best cash game players on the planet. Bradley spoke to each player about the way in which he or she found success in a game that can be humbling for so many. What worked for them can work for you.

What listeners say about The Pursuit of Poker Success: Learn from 50 of the World's Best Poker Players

Well done. I learned a lot about the mindset of many of the pros, how they got started, was really interesting to hear how they handled the downswings, and how they all had them.

overall i gave the book a 4. Personally best Chapters are Phil Hellmuths and Daniel N. Cool hearing everyones story to being a pro player and the adversity they dealt with. If your looking to hear poker strategy talk, this book is not for you.

there's some good stuff in there but chapters are very short and it has a very unfinished feel to it. chapters just end with no closing statements or conclusions not the best poker book not the worst.

Great Look into some great minds!

This was a great listen. To hear how greats view success some similarities but a lot of differences as well. It was also a good view of the different paths to success.