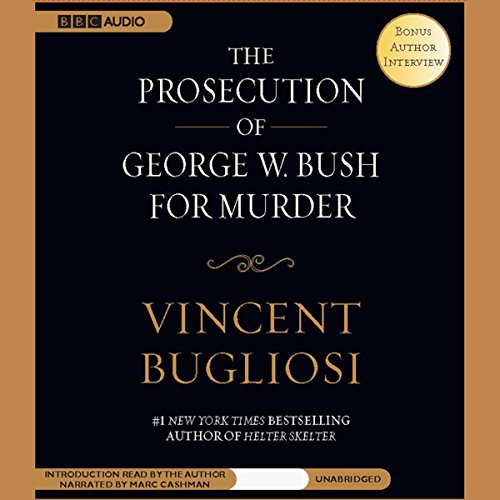 The Prosecution of George W. Bush for Murder

Best-selling author Vincent Bugliosi has written the most important and thought-provoking book of his prolific career. In a meticulously researched and clearly presented legal case that puts George W. Bush on trial for murder after he leaves his presidency, Bugliosi delivers a searing indictment of the president and his administration.

With what he believes is overwhelming evidence that President Bush took the nation to war in Iraq under false pretenses - a war that has caused great loss of life, cost this nation close to $1 trillion, and alienated most of our allies in the Western world - Bugliosi argues that it is George W. Bush who must be held accountable for what Bugliosi considers to be monumental crimes.

In this groundbreaking book, Bugliosi, in his inimitable style, presents a powerful case against the man in the oval office.

What listeners say about The Prosecution of George W. Bush for Murder

I found this educating and riveting. Please listen and learn!

At last someone has spoken out against that which we outside the USA could clearly see was a war crime.

Reading (listening to ) Mr. Bugliosi's words reminds strongly of the tactics used by Hitler to justify going to war as presented at the Nuremberg trials.

Bush needs to be face a war crimes tribunal for the same reasons that the Second World War left Europe in chaos and destruction. Bush has caused the destruction of a civilized society for no apparent reason other than the same motivation Hitler had...... because he wanted to.

When Bush gave his reasons for wanting to go to war against Iraq we in Europe and Africa could clearly see that his claims of WMD's were spurious. But for some reason the citizens of the USA seemed blind to this fact, despite the UN inspectors clearly and unambiguously stating this on an international platform. I was mortified when the war started despite this seemingly obvious fact. I could not believe that the nation that played such a prominent role in the Nuremberg trials could so obviously do exactly that for which they prosecuted the Nazis.

I thank Mr. Bugliosi for what he has made public and I pray that Mr. Bush will have his day in court.

A detailed and fascinating account that leaves you in no doubt that the war in Iraq was illegal and that George W Bush lied to the American public and the rest of the world. He had a report from his own secret service stating their belief that there was no Immediate or present danger from Iran or Saddam Hussein and there were no links between Al Queda or Saddam's Ba'athist party. All the evidence exists to place George W Bush on trial for murder and I sincerely hope that it happens. Vincent Bugliosi has written what might be his most important book to date.

A lesson in don’t believe what you are told, do your research! Very convincing and if accurate something that should make GWB feel terrified for the remainder of his life!

Most excellent book, incredibly well researched and presented. Shame on the USA for voting this complete notright into power not just once but TWICE!! George Dubbya and Tony Bliar are response for the very unstable world we now inhabit and should both be put on trial for war crimes and not just murder. This book talks about the murder of 100000 people I think the figure is now closer to 2 million! Unforgivable

This book is a must-read to all consciencious Americans, and students of logical thinking.

Bugliosi has built a tight, fact-based case against a criminal President.

The well-researched information provided in this book, supported by Bugliosi's experience as a successful prosecutor, helps elevate an average reader to the level of a critical observer.

I find my own evaluation and thinking (or lack thereof) of events post Sept 11 being challenged, and challenged well.

The audio is an interesting listen. The narrator does a great job presenting material. Not a moment of boredom.

Bugliosi gained a lot of cred in my mind, with 'Helter Skelter' and even more so 'Reclaiming History..'. So I had high hopes for what I felt was a well-deserved reckoning for the father of the nightmare this country had to endure for the last 8 years and the aftermath from which we now have to resurrect our country's moral compass, for ourselves and in the eyes of the rest of the world. I expected a cool, concise and most of all convincing justification for such an audacious title - along the lines of 'Reclaiming History..'. This, however was way too much of an emotional rant; a rambling and sputtering gripe-session, so biased, and often distracted by irrelevant details, as to actually detract from the meaningful, and critical material that's being laid out. This was more like listening to a kind of bizarro Rush Limbaugh or Ann Coulter (and Cashman's subtle impersonation of Bush when reading his quotes doesn't help much in this regard). I'm glad he wrote it, but wish his publisher had held him to a higher standard, telling him to turn down the bile, and steering him away from issues like academy award-winning rap songs, sexual promiscuity amongst the younger generation, or chronicling Bush's 'happiness' in casual press conferences. Bugliosi's anger is justifiable; his base premise is spot-on. But the curmudgeonly background noise and judgmental tangents he slogs through have unwittingly framed them as the bitter rantings of a pissed-off grandfather talking about 'kids these days'. Criticism aside, I admire his courage, and still think there is a fundamental need for true justice and reconciliation if America to right itself. To that end and in the spirit of 'Prosecution' I highly recommend reading Scott Horton's essay in Harper's Dec '08: Justice after Bush: Prosecuting an outlaw administration.
I generally like your work Mr. B, but this one needs a serious makeover to achieve its ambitions.

Premise of book could have been interesting, but author killed it with Quote and End Quote notations. Senile or as looney as Charlie Manson.
Of 30 plus downloads I've done from Audible -- this was the first loser.

I could have lived without the petty Bush bashing in the first three chapters. But Chapter 4 is a must read. The Bush administration's blatant manipulation of intelligence to scare us into war is criminal, and should be prosecuted. Wake up America. The King is NOT above the law, and must be prosecuted.

Nothing new here. Yes, we all sympathize with those closest to the great loss created by Bush's war but I couldn't get past the section where the author begins quoting what sounds like every article ever written reporting casualties. Maybe try the paper book and skip through it.

This heart of this book is contained primarily in chapter two, where the details of such a prosecution are revealed. This chapter is worth listening to in order to see how a prosecutor would question the witness, George W. Bush.

However, the rest of the book, chapter one and three, while largely valid, is composed of the author's rants which undermine the impact of his thesus.

That is, if we are to believe that a prosecution of any citizen is a non-partisan attempt to seek justice, why would we trust a prosecutorial perspective that blatantly reveals such personal bias against the defendant.

It seems that there are two books here, one titled "The Cross Examination of George W. Bush" and "I Hate Bush and So Should You."

I have no love for Bush, but this is not the legalistic, academic approach that I anticipated when purchasing this audio book.

This book is brilliantly written and demands action. For too long I have felt like I must be the only one who cares about all the lawbreaking and murders committed by this administration. Thank goodness for Bugliosi!

I have read several of Bugliosi's prior books, all of which I have enjoyed. I was very disappointed by this book. I thought it might be a thoughtful look at whether the actions of Bush amounted to war crimes. Instead it is a personal attack on Bush (not for his policies but whether he loves America, calling him names, attacking his mother's character, whether he was personally distressed by the thousands of deaths in Iraq, whether he was on vacation too much). I only made it through the first couple of hours but during that part of the book, another theme was how much more hard working he was than Bush. The point isn't whether Bush is a patriot, a coward or lazy but whether his policies were based on truth, sound intelligence or political ends over all else. Anyone hoping for kind of serious thorough analysis of the facts that support or rebut suggestions that Bush's actions were criminal or just very ill advised but well intentioned should not waste their time on this book.

I agree that what Bugliosi proposes would not likely happen as he lays out in the book (e.g., what would be admitted as evidence, Bush's lawyer objecting to lines of questionning). Even so, he makes a great argument. Others were annoyed by "quote," but what got me was just how large Bugliosi's ego is. He spent the first 30 mins bragging about himself and then spendt the last 30 or so in an interview set up - it sounded like he interviewed himself. Again...his gigantic ego. My summary of Bugliosi's argument - (1) Bush lied and should be held responsible & (2) Bugliosi is in love w/ himself.

Too close to subject...

The author is a little to close to this subject and gets too carried away in my opinon. I do agree with him, but a little less passion might have served him well here.