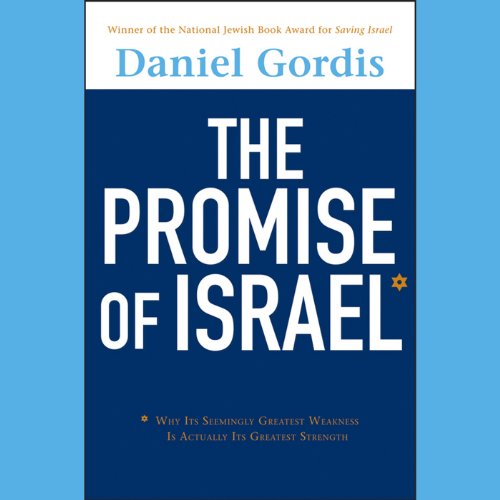 The Promise of Israel

Why Israel's greatest weakness is its greatest strength, and what its supporters and enemies can learn from its success

Israel's critics in the West insist that no country founded on a single religion or culture can stay democratic and prosperous - but they're wrong. In The Promise of Israel, Daniel Gordis points out that Israel has defied that conventional wisdom. It has provided its citizens infinitely greater liberty and prosperity than anyone expected, faring far better than any other young nation. Israel's "magic" is a unique blend of democracy and tradition, of unabashed particularism coupled to intellectual and cultural openness. Given Israel's success, it would make sense for many other countries, from Rwanda to Afghanistan and even Iran, to look at how they've done it. In fact, rather than seeking to destroy Israel, the Palestinians would serve their own best interests by trying to copy it.

Certain to generate controversy and debate, The Promise of Israel is one of the most interesting and original books about Israel in years.

What listeners say about The Promise of Israel

If Israel is tolerant as the author says, then God will put them asunder. The United States of America has been under questionable leadership and has promoted tolerance. Now as a copy of Sodom and Gomorrah, our great country allows homosexuality and abortion and all sorts of changes that serve to corrupt the country more.

The Bible tells us in the end times satan's minions will practice to delude as many as possible. While quoting many Scriptures, the author used them to support a doctrine of tolerance, while at the same time seeming to support Israel. What Israel? The Israel of God almighty of the Bible? I think not! Read carefully.

We must be alert to the subtleties that sound good but are not necessarily biblical.

If you want to read a book about what God says, read the Bible. It's the inerrant Word of God!

I don't think it's too much to ask for a speaker who can pronounce the names of people and places correctly, as well as Hebrew words. The book is filled with mispronunciations that become incredibly distractions. Other than that, the idea of the book is pretty decent. Gordis does a good job at making a case for nationalism and the nation-state in the modern world.