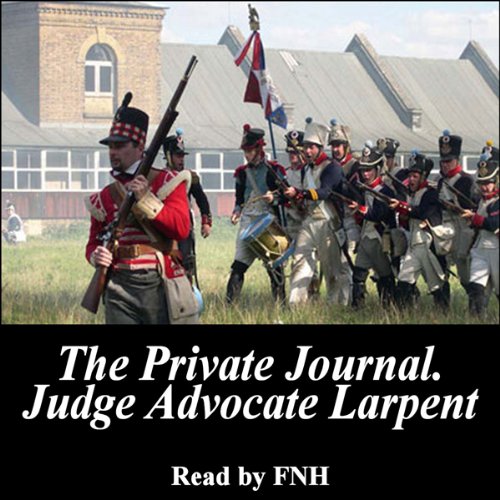 The Private Journal of Judge-Advocate Larpent

During the Peninsular campaign of the Napoleonic wars, the author of this book travelled with Wellington's headquarters. His position as Judge-Advocate kept him busy prosecuting the wrongdoers of the army. In this narrative you'll get to hear first-hand accounts of the various battles and sieges of the campaign including Vitoria. Other highlights include anecdotes of Wellington, murders, skirmishes, the narrator being captured by the enemy, the fall of Pamplona, deserters, rocket fire, and the marvellous bridge of boats.

What listeners say about The Private Journal of Judge-Advocate Larpent

Primary source Beautifully read 80% Speedo best- so many vignettes about what goes on along side the war thank you.

could have been really good

A different narrator with a better grasp of the English language

A good item ruined by an atrocious reader, i get the feeling this is some sort of vanity project dreamed up by him the illustrious "Felbrigg Napoleon Herriot" which has got be the most pompous moniker i have ever seen in print , possibly rivalled only by Simon Sebag Montefiore

This is an incredibly interesting account of everyday life for a high ranking noncombat officer on Wellington's staff during the later days of the peninsular war. If you are considering purchasing this book, be aware that you will not find descriptions of combat here. What you will find is a well detailed account of the general worldview of senior officers at the time, accounts and personal comments of military law and punishments, and whey they should be, a fair accounting of Wellington's personal life at the time, the struggles of "gentlemen" while enduring wartime camp life, interesting accounts of some logistical issues during the campaign, and generally the sort of background detail which most military histories would not cover in any detail. Readers will gain little terms of tactics, maneuvers, order of battle, or even a general understanding of the military situation. What they will gain is a better understanding of society at the time, a better appreciation of "fog of war" at the supreme command level, and how the war was seen by British Gentry.