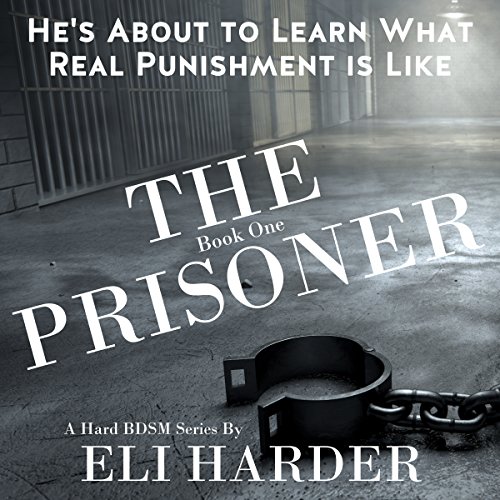 Newly sentenced felon Neal Landon reads the gut-wrenching punishment manual for the Life Sentence Diversion and Rehabilitation Program. If he chooses to enter the program, he'll be given to a handler whose sole duty is to punish him, and train him. Can he endure the harsh punishments outlined in the manual in exchange for his eventual freedom?

Read the rules for prisoners and the punishment manual for handlers along with him. Among other things, the manual includes a 6-part guide to beatings: restraint on the rack, implements, intervals, the standard 10-point beating, intensifying a beating, and severity.

It also details the cramped cell with its heavy shackle, the specially designed chamber for stress positions, and tiny concrete tomb that the prisoner will be housed in. Imagine his horror as he reads about the electric shock collar he will wear at all times, pronged shackles, stress positions, and how his body's most basic functions and desires will be used to torment him.

He'll learn that he may be forced to wear a bit and pull a cart until he's exhausted, and that his handler might follow it up with placing clamps on the sensitive tissue of his weary body and stretching exquisitely tender muscles with plugs for several hours.

He will discover he is required to observe strict chastity for the duration of the program, with no relief of one of his deepest needs and temptations.

The punishment manual is cruelly detailed in its description of things like application of capsicum cream to welts, forcing the prisoner to sit motionless on rocks after a severe beating, and leaving him spread-eagled in solitary confinement with constant pressure on tender wrists and ankles.

Reading the list, he can only imagine how the punishments within could be cruelly combined in infinite ways until he was rendered completely submissive and obedient to his handler.

What listeners say about The Prisoner

Well this series has got my attention. I'm looking forward to seeing where Eli Harder takes this one. We've met the prisoner and understand his mindset, now bring on the handler!

Maxx Power's voice works well here. This first volume is an explanation of the program and a long list of various punishments - descriptions of all kinds - and he reads it like a manual, very matter-of-fact.

I'm sorry only the first two made it into audiobook format, but the rest are on KU so I'm good.

I was really looking forward to this book. Unfortunately it felt it fell a bit flat. The way it was written left what should have been a very interesting little book very boring. Hopefully the second book will be more interesting.

The story didn't hold my attention and became boring. I didn't get to finish it. The story was about a bunch of rules and punishments. Not something I was interested in.

Could've used more character development and actual story for the first installment. It sounded like a text book being read because it pretty much was...the whole short book. (Well, a contract) Would've been better if the author put book one and two together as book one.

I want more of this story

Interesting. Very graphic story of use of torcher in order to be released from a life sentence after years of 'training'
The Manuel for the trainer is read in this book with details of what is and what is not allowed in the correction torcher of a prisoner.

Maxx Power's reading if very good and makes the story all that much more chilling.

*** I received a free audiobook in exchange for my honest feedback ***

STORY
Being a lover of dark erotica, I was really looking forward to listening to this audiobook then HUGELY disappointed with what I heard! This first installment, &quot;He's About To Learn What Real Punishment Is Like&quot; is a very misleading title and not a complete book but just a few chapters foreshadowing what author Eli Harder will hopefully have in store for us later in the series. In this, &quot;book&quot;, there is no punishment, no BDSM, no sex, no nothing! Simply put, only three things happen:
- The main character is presented with the option of entering this specialized jail program.
- We read the program manual along with the main character.
- The main character signs up for the program.

When I began listening to this book, I was expecting to hear BDSM fiction; the last thing I expected or wanted to listen to was nonfiction-like material but surprisingly, that's what 95% of this book is. The longest chapter in this book is titled, &quot;the manual&quot; and that is precisely what it is: a manual. For over an hour (literally 1/3 of the book), the narrator reads the program manual to us, every boring word for word. Even though the manual discusses torture equipment, genitals and other topics that you'll probably never find in a prison manual, it quickly became painfully monotonous. If I hadn't received this book for free, I most definitely would have skimmed through most of this chapter. Eli Harder did succeed in one major way though.... I now feel compelled to purchase the rest of the series so I can find out what happens next!

PERFORMANCE
I listened to the Audible audiobook narrated by Maxx Power. Overall, Mr. Power did an adequate job. Most of the time he was tasked with reading, &quot;the manual&quot; where all he had to do was read (not having to deliver any type of performance) yet during the brief periods of time that he did have to speak for the characters, he did slightly change his cadence, exude emotion, etc..

I don't think I've ever read a book like this before. It was dark and at times I wasn't sure I could handle how dark this was but it was so good! The narration was fantastic! I can't wait to check out more by both this author and narrator.

I received a complimentary copy of this audiobook in exchange for an honest review.