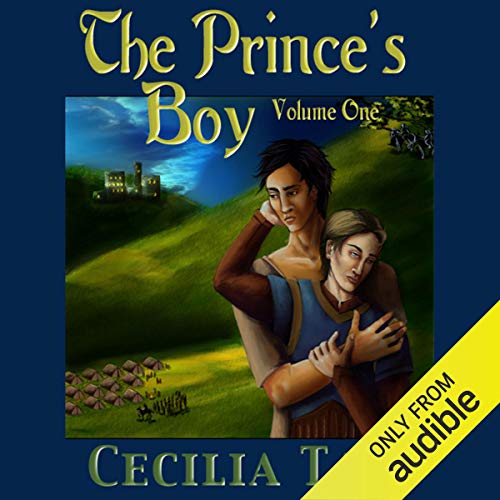 In a fantasy world where male/male lust fuels Night Magic, Prince Kenet lives a sheltered life. Isolated from the war that threatens the kingdom, he and his whipping boy Jorin are of age, but still sneak forbidden pleasures in their bed at night. When a dark mage tries to bespell Kenet into sexual submission, the prince and his boy are thrust into the world of intrigue, sex, and war. Volume One of The Prince's Boy collects chapters 1 through 56 of this wildly popular gay erotic web serial by Cecilia Tan. Begun on July 29, 2009, chapters were posted weekly, following the adventures of Prince Kenet and his whipping boy, Jorin. Drawing on complex themes of dominance and submission, the need for secrecy in a world where homosexuality is not accepted, and the intertwining of sex with magic, Tan weaves a complex, sex-filled adventure that is part "Three Musketeers" and part "Claiming of Sleeping Beauty."

What listeners say about The Prince's Boy, Volume 1

with all that sex how did anything get done??

this is a strange tale, I nearly gave up around chapter 15 but kept going. There really is far to much sex. I understand what the author is trying to say but more story would have been better.. the last few chapters improved as the story started getting a bit better, and maybe the second book might be better. I was going to announce I wasn't going to buy the next one but of course I need to know what happens so I have bought it.

This book takes the popular fantasy listening to the next level of wizards, adventure and very dirty sex.

I just loved this book. The sex is a bit much but considering the fact that the plot is more prevalent than the sex stuff and the fact the plot itself was just great and lasted, it was just by far the best book ever in gay erotica.

I'm going to write this review as encompassing both volumes of "The Prince's Boy" rather than writing two separate reviews. To begin with, I listened to this very slowly, knowing it was written as a serial. I only went through two or three chapters per sitting. This kept the constant sex from feeling so overwhelming! The story obviously kept me engaged enough that I listened through both parts. It's nice to be entertained by erotica that isn't bound by the rules so many publishers put on their works. i.e. Partners should only have sex with each other, no one can be under twenty-one, no violence, no rape, no drugs, no this no that no anything blah blah blah... Just let the author tell the freaking story! And Cecelia Tan certainly does! Her plotting was well done and engaging, though it felt somewhat rambling at times--as though she needed to meet a certain number of installments and therefore just filled up space. This fantasy world she's created seems quite thought out and detailed; for a fantasy, I very much appreciate that. I found her writing style somewhat uneven. At times it was flowery and elegant, then I would feel as though I was hit with the most ridiculous similes which pulled me out of the story and made me think, "This woman doesn't know how to write male characters!" Which is an unfortunate thing to think considering that there are literally NO female characters whatsoever!

There were a few things I found somewhat repellant: the description of the villains *throat clearing* member, if you will, the fact that the prince himself, due to the spell put on him, has to subsist only on men's "milk", and finally, the general's lack of male parts and how that figures in sexually. I also found it hard to believe in the feelings the prince and his whipping boy have for each other when both are so eager for sexual acts with anyone and everyone they come in contact with. As a result, they seem to fall for these vast numbers of males and yet quickly come back to one another and act as though they hadn't really felt a thing for all those many, many, many...many, many men.

As for the narrator... Mr. Wagner, or however he pronounces it, really is quite talented! He's certainly up for the task of performing this work! Almost too much so. While he is consistent in a separate narrative voice for both prince and boy, there seemed no rhyme or reason to the various dialects he chose to use for the many characters. I understand when a book has nothing but male characters that there are only so many men's voices a person can come up with. I heard Irish, English and Scottish (and unfortunately, his English accent in particular didn't come off well and lacked the subtle nuances that would ever make me think he might actually be a Brit; if one can't do an effective dialect, one shouldn't attempt it!), some kind of French and even something that sounded Russian. Most of the time he was consistent in the character voices, but occasionally someone who didn't have an accent when first introduced would suddenly be Sort-Of-English later in the book, or while talking to another character who was Sort-Of-English, he would also become Sort-Of-English. He also gave emotional inflections to his voice at odd times and I found that extremely distracting! Just because there is an exclamation point at the end of a sentence, doesn't mean the line needs TO BE SHOUTED!!! Overall, as a voice-actor, Mr. Wagner seemed to think that in this one book alone, he needed to pull out all his vocal tricks and make them work somewhere. His performance would truly have been excellent if he had just calmed down a bit. He really just acted the crap out of this novel and I don't mean that in a completely flattering way.

Loved this book all the way through! Kinkier than I was expecting but I just loved it even more because of that! Great characters and a unique fantasy setting. The voice actor had talent and gave a great performance. This book needs to be approached with the appropriate headspace, or else the situations the characters are put through can be mosconstrued. Highly recommend this author and will be reading more of her work!

A fabulous audible full of well placed sex,bdsm,magic, adventure ,love ,romance and plenty of "milk" to drink 😉
the narration Is just fantastic.
this narrator knows what he is doing with this great storie.
there are so many charcters in this book and he executes each one perfectly and differently.
this is an outstanding audio.
highly recomend it . it's a 2 book story
enjoy I know I did.😈

Got boring after a while

Concentrate on the young i

The reading was well done, and the cadence of Roman's voice was natural and very enjoyable. His voices for the different characters demonstrated versatility and the wide array of characters were easily performed by him. The sex scenes were original and hot, hot, hot! Very much based on domination and submission. Although the sex scenes were absolutely plentiful, the author manged to tell a tale about a Prince and his whipping boy. The tale does not primarily happen in the castle, but rather while they journey the countryside searching for each other.

We have witches and spells, dragons are all gone and the rest is very fantastical.
I will definitely listen to book 2, but only when the mood strikes.

I literally want to punch in the mage's face in!! I'm literally on edge wanting to beat him up. Hahaha

Did there really have to be a sex scene in every chapter? I was hoping for a good "gay fantasy" and all i got was a cliche. If you want eight hours of sex and the rest cuddle talk, this is the book for you. If you are looking for a book full of fantasy and adventure with gay characters, keep looking.

it was okay, dare I say too much sex

I skipped over sex after sex, oy every chapter has sex. it was too much