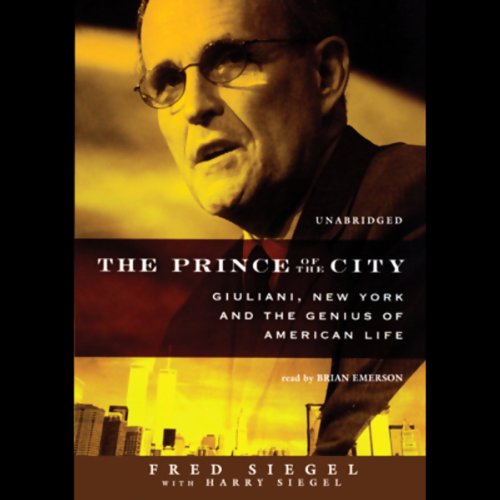 The Prince of the City

The Prince of the City

In the first post-9/11 account of the career of the man who established himself as "America's Mayor" in the dark days after America was attacked, Fred Siegel shows how Rudy Giuliani's successes in New York set a promising example for the rejuvenation of our major cities. Someone who has worked with Giuliani as well as studied him, Siegel regards Giuliani as a shrewd tactician and artist of the possible who could have stepped out of the pages of Machiavelli's The Prince. A self-promoting, self-absorbed man, the mayor made his enormous ego and tribal ethos serve the city's well-being, promoting ideals that transcended New York's ethnic politics and business as usual. The Prince of the City is at once a fascinating character study, a history of New York over the last 40 years, and a classic inquiry into the issue of how cities thrive or die.
©2005 Fred Siegel (P)2006 Blackstone Audiobooks

"Siegel presents a positive but not uncritical opinion of the Giuliani record, which is of interest in itself but especially if Giuliani runs for president." ( Booklist)

Far more than a Guliani bio, this is a fascinating tale of NYC. Definitely the best book I've read in months!

Do not Vote for Giuliani

After reading this fabulously written biography of Rudy, I came to the conclusion that he was a GREAT mayor for New York but he will be a disaster as President of the United States of America.

Put Giuliani in charge of Detroit, which is now the most dangerous city in the country but let's keep him away from the White House.

It is interesting that Giuliani did not interview for this book. This book is more about trying to give Guiliani an image of a smart small government thinker to help in the Republican primaries. The whole time thoughts of can this work on the national scale run through the mind, and that is exactly what the author wants. Ultimately, it paints a picture of a powerful mayor who was able to institute True Republican (Read Jeffersonian not Neo Conservative) values into LOCAL government. Do you think it will work on a national scale? Listen and figure out for yourself...