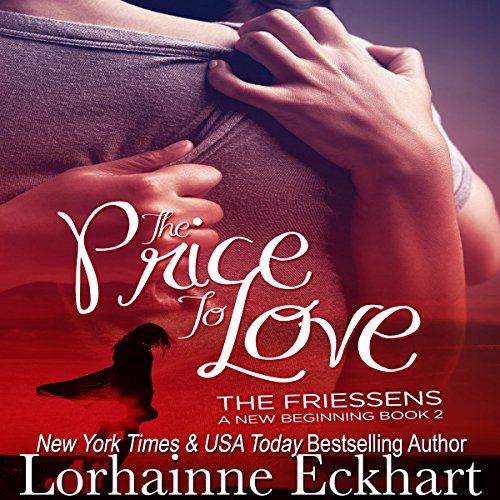 The Price to Love

The highly anticipated second book in The Friessens: A New Beginning continues with the moving saga of Neil and Candy in The Price to Love.

*Warning - This is a highly emotional romance with realistic elements that may tug at your heartstrings.

...I knew my husband wanted a baby, but I couldn't give him one. When Neil paid for a surrogate and moved her into our home, he told me not to worry, but I couldn't help but notice that she recognized the strong, sexy alpha male inside him, and I suddenly felt as if I was on the outside looking in.

Then, one day, I met Cat, the young girl who stole my heart. I saw something in Cat that I couldn't turn away from: a damaged, scarred soul filled with the kind of despair and hopelessness that should never have been in the innocent eyes of a child.

Cat needed me - my voice, my hugs, and my love - and she captured my heart. However, neither Neil nor his family understood my need to help her. I found myself alone, and I knew I was the only one who could save Cat before it was too late.

What listeners say about The Price to Love


I listened to this on audible, narrated by Valerie Gilbert and I was very impresses with the narrator as well. Me Gilbert captured the main protagonist so perfectly. She is becoming one of my fave narrator

How far would you go for Love?

I am still trying to absorb what I just heard in this audible story! Neal Friessen is a husband with an extreme lack of communication with his wife Candy. She feels misunderstood and lacking. She can’t give him the one thing he wants most a baby. He finds away and in his eagerness makes a judgement call that nearly destroys there marriage. It takes a stranger and a young girl to make him see what an s.o.b. he was, or still is! Valerie Gilbert did an amazing job bringing the Friessens to life in book 2 The Price of Love.

How much would you pay for your dream?

This is an interesting and a very emotional story. It covers the issue that many families are facing: lack of true communication between a husband and a wife. The above leads to assumptions, mistrust, jealousy and rift in relationship. Sometimes only objective support from outside can fix the situation. Narrator was doing a great job giving unique voices to different characters, speaking with Mexican accent and displaying various emotions according to the situation.

I am not a huge fan of romance but I am a huge fan of this authors romance writing.
With a real, plausible story as the plot the romance part, although not small is used to further the plot, it is never THE plot.
I listened to this on audible, narrated by Valerie Gilbert and I was very impresses with the narrator as well. Me Gilbert captured the main protagonist so perfectly.

A short read but one worth reading.

Oh my god, I haven't cried with a book in a few months like I cried with this one. I really did not liked Candy in their first story but OH MY GOD! I love this book. For a good cry, this book.

I loved hating Neil in this story.

Would you listen to The Price to Love again? Why?

Yes, because I couldn't believe how asinine Neil was behaving towards Candy. It's like he was trying to see how far he could go, how much she would take because things crashed down around them.

Just as my headline for this review states: I loved hating Neil.

Which character – as performed by Valerie Gilbert – was your favorite?

For a character I'd have to go with Maria and/or her mother. Why? Because Valerie did a Spanish accent. Valerie Gilbert is on a roll, in my opinion. I love how she can do so many accents that come out sounding so natural.

It moved me in a bad way, I think. A way that I would describe more like: 'What the heck is going on here' type moment. It was after Jim has a fight/talk with Neil and Neil is suddenly like a new man, sort of. It's like he either wasn't really listening to Candy or just didn't care, it was hard to tell. I'd go with the second option though since he was constantly talking down to Candy and even though she was getting mad at him everything he decided something without her input, he continued to do as he wished. I think he had issues with females in general, he didn't see them as being equal with men. Neil is best described as being a chauvinistic prick.

I have to start with my most important question: Why did Neil not wake up or realize how upset Candy was until Jim punched and talked to him? That made absolutely no sense to me. It’s like he did a 180 after that. Minus the fact that he ended up lying to her about the miscarriage and then adoption of a baby boy.

There doesn’t really seem to be that many differences between Candy and Neil and the Laura and Andy from the first book. Both men are extremely controlling, neither talk important matters over with their wives, and they treat their wives as children. Likewise, both women are very weak, feel jealous towards the ‘other woman’ (Kim and Maria), and they end up having to stand up to their husbands and do a horrible job at it. Out of the two men, I think Andy was a much better choice. I couldn’t stand being in Candy’s position with a husband like Neil. I’m pretty sure I would have asked for a divorce after finding out Neil used Maria’s egg instead of a donor. That’s like a smack in the face to Candy. Wow. Not to mention that Maria moves into their house and is in the room right across from their master bedroom?

Neil and his father are both into ranching and raising cattle. For some reason though, the fact that Andy was getting ready to start raising cattle never popped out.

If Candy doesn’t really Neil picking her clothes out, which seems very strange to me, why wouldn’t she have said something?

Why did Candy get so upset that Neil had already spoken to Maria on the phone, prior to her visit? I mean, why would Maria and her mother have shown up if they didn’t know what they were coming for? That made no sense to me.

The fact that Candy is mad at Neil after his getting the surrogacy papers ready and signed was a good thing. She’s a part of the family (his wife) and should have been involved. The fact that she ends up giving in so easy ‘because she enjoys making out’ was stupid. She might as well have not gotten mad in the first place. That was a really stupid scene since nothing was gained. She didn’t even bother asking about the specifics for what Maria was going to do.

Neil is always doing stuff that he should talk with Candy over first. She gets mad, his response? “Come on, Candy.” Over and over again. Their interactions seem to be on repeat.

Candy and Neil are married and struggling with wanting a family. However they're on opposite sides on how to accomplish the goal of creating their family. Enter Maria a young woman hired to be a surrogate for them and more problems arise. Then there's Cat a little orphan girl whose stolen Candy's heart. Will Candy and Neil be able to overcome the one obstacle that can tear their marriage apart? Or will Neil get the much needed wake up call to fight for the love of his life? This was a heartbreaking yet fantastic story about love conquering all that readers will love.

I love this book but I can't believe Neil did that and I think it's going to back fire. I can't wait to see what happens.