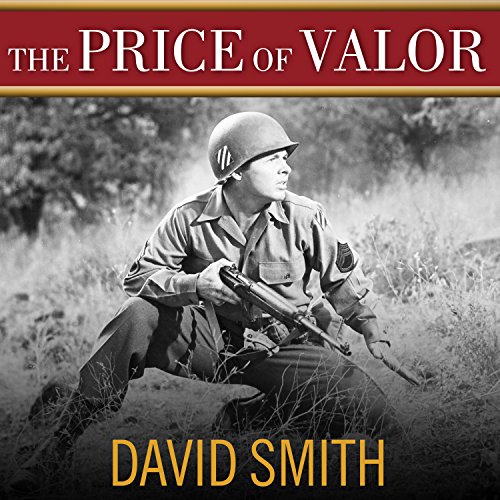 The Price of Valor

By: David Smith
Narrated by: Tom Perkins
Try for £0.00

When he was 17 years old, Audie Murphy falsified his birth records so that he could enlist in the army and help defeat the Nazis. When he was 19, he single-handedly turned back the German army at the Battle of Colmar Pocket by climbing on top of a tank with a machine gun, a moment immortalized in the classic film To Hell and Back, starring Audie himself.

In the first biography covering his entire life - including his severe PTSD and his tragic death at age 45 - the unusual story of Audie Murphy, the most decorated hero of World War II, is brought to life for a new generation.

What listeners say about The Price of Valor

Growing up Audie Murphy was one of my heroes. To finally hear his story is amazing. He was a shy determined young man who beat all the odds in WW2. He cam away with every honour/medal there was to have.
He suffered geatly with PTSD and still went on to become a movie star. A tragic end to his story in the plane crash.
RIP Audie Murphy.
A great biography

If you want to hear about a real hero, a word that is used so much in the media that it’s lost it’s true meaning. This is about a true hero who put his life on the line time and again to help his comrades in arms

The shame of this book is that Audie Murphy could offer an intense understanding of a valiant and tortured man. This isn't even on a Life magazine reporting level: this is TV Guide at its worst. The prose oohs and aahs, and the narrator sounds like a souped up TV entertainment talk show. Nope, nope, nope. Save your credit, your money, your time. I gave it two stars across the board only because when Murphy WAS quoted it did indeed sound like him. Bleah.

The Price of Valor

Really gives you a inside look in the public and private life of Audie L. Murphy Very good book

From a decorated Vietnam combat veteran....

I’ve wanted for many years to read something honest and concise about Audie Murphy. My experiences in Vietnam left me with no interest in dramatisations of war. I’ve avoided virtually all of them for 50 years. An exception was Ken Burns’ series on Vietnam. It reached exceedingly deep into my soul where I ordinarily spend no time. I’ve made peace with “what’s under the bed”. I wept more than once during my focused listening to this book. The writing is excellent. The narration superb. But the man as extraordinary as he was, returned from war,, as my mother said of me, but not all of him. There are two books here: one a biography of Audience Murphy, the other, a clinical case study of the inescapable trauma of combat. Thank you so very much.

Not enough about his army days

Most people want to hear about his army days. I understand that he was a movie star but would rather here about his heroic actions during ww2.

If you could sum up The Price of Valor in three words, what would they be?

That would have to be Audie.

The book made me think about a different time when people were certainly different, notice I didnt necessarily say better, but very different.I was born in 1965 and even I feel that our country and people changed has much in that decade as in the 100 years before this time. Audie was definitely a man from the pre 1965 era, who never quite fit in after the war, and like so many warriors, was never comfortable with the fame his service earned for him. I often wonder what would happen in America if we were faced by an enemy such as Japan or Germany. I wonder how todays soldier would react to three qaurters of his or her unit being wiped out in a few minutes, or how the general public would react to the sacrifices required of it in such a conflict. And then I think the soldiers , sailors and airman would eventually adapt and overcome, and as for the public...well...still I wonder.

BEST NARRATOR EVER!!!!!!!....hour after hour of proper pronunciation and no fake drama or imitations...very encouraging!!!!!

Over the centuries we have given names to the unseen wounds people who fight and survive bloody battles carry with them. Society has called it battle fatigue, shell shock, and today we call it PTSD. The best part of this book are the citations that tell in clear, short sentences, the actions Murphy took for each medal. Even if you are not into the mythology of the Hero, find this book and listen/read those citations.

In the nineteen forties these unseen wounds were not only denied but it was scorned. Even the people who lived with these hidden wounds were expected to never complain, never quit. Audie Leon Murphy did just that. But he paid for the stoicism in other ways.

This book tells what happened to the most decorated hero of WWII, after he put away all of the decorations. It is well worth the time spent reading it.

But for the rest of his life Audie Leon Murphy relived, not just his achievements, but the death and wounds of his friends and the people he killed.

He never complained. He never asked for sympathy. He never apologized for sleeping with the lights on.

interesting, never knew this about that crazy kid from texas. what a true American hero