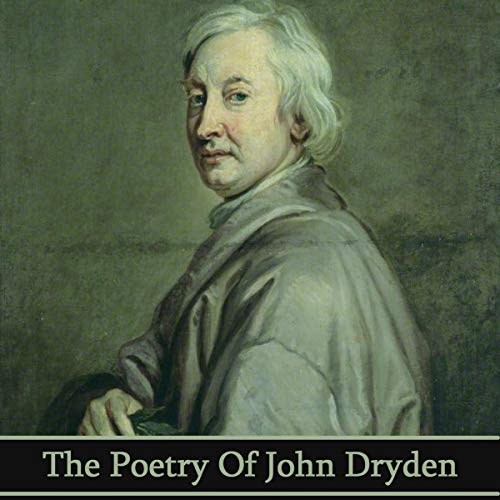 The Poetry of John Dryden

John Dryden was born on August 9th, 1631, in the village rectory of Aldwincle near Thrapston in Northamptonshire and grew up in a nearby village. In 1644 he was sent to Westminster School as a King's Scholar and then obtained his BA in 1654, graduating top of the list for Trinity College, Cambridge that year.

Returning to London during The Protectorate, Dryden found work with Cromwell's Secretary of State, John Thurloe. At Cromwell's funeral on November 23rd 1658 he found company with the Puritan poets John Milton and Andrew Marvell. The setting was to be a sea change in English history. From Republic to Monarchy and from one set of lauded poets to what would soon become the Age of Dryden. Later that year he published the first of his great poems, Heroic Stanzas (1658), a eulogy on Cromwell's death.

With the Restoration of the Monarchy in 1660 Dryden celebrated in verse with Astraea Redux, an authentic royalist panegyric and with the re-opening of the theatres he began to also write plays. His first, The Wild Gallant, appeared in 1663 and whilst not successful, he was contracted to produce three plays a year for the King's Company, in which he became a shareholder. During the 1660s and '70s, theatrical writing was his main source of income.

In 1667, he published Annus Mirabilis, a lengthy historical poem which described the English defeat of the Dutch naval fleet and the Great Fire of London. This work established him as the pre-eminent poet of his generation, and was crucial in his attaining the posts of Poet Laureate in 1668 and a couple of years later, historiographer royal (1670), as his talent encompassed many forms; from poetry to plays to translations.

In 1694 he began work on what would be his most ambitious and defining work as translator, The Works of Virgil (1697), which was published by subscription. It was a national event.

John Dryden died on May 12th, 1700, and was initially buried in St. Anne's cemetery in Soho, before being exhumed and reburied in Westminster Abbey 10 days later.

This volume comes to you from Portable Poetry, a specialized imprint from Deadtree Publishing. Our range is large and growing and covers single poets, themes, and many compilations.

What listeners say about The Poetry of John Dryden