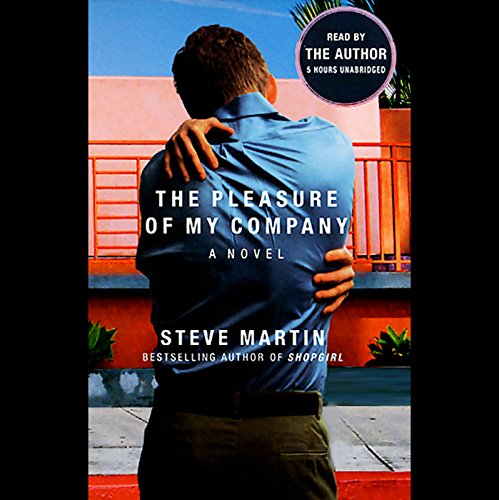 The Pleasure of My Company

Daniel Pecan Cambridge, 30, 35, 38 or 27, depending on how he feels that day, is a young man whose life is rich and full, provided he never leaves his Santa Monica apartment. After all, outside there are 8-inch-high curbs and there's always the horrible chance he might see a gas station attendant wearing a blue hat. So, except for the occasional trip to the Rite Aid to admire the California girl Zandy and to buy earplugs because they're on sale, he stays home a lot. And good thing too, or he would have never been falsely implicated in a murder, never almost seduced by Philipa, never done the impossible task of jogging around the block with Brian, never ironed his pillows, and might never have won the Most Average American essay contest.

In The Pleasure of My Company, Steve Martin's second novel, all of the enjoyments of the critically acclaimed best seller Shopgirl are present: the tender portrayal of loneliness and love; a character's quest to reach out and engage the world; as well as laugh-out-loud humor and language that is brilliantly inventive. But in the story of Daniel Pecan Cambridge and the people who inhabit the insular universe he is seeking to expand (if only one small square at a time) Steve Martin has achieved something extraordinary: the chronicle of a modern-day neurotic yearning to break free.

"This novella is a delight....A complex mix of wit, poignancy, and Martin's clear, great affection for his characters." ( Publishers Weekly)
"A genuinely funny and surprisingly touching tale. As compassionate as it is funny." ( Kirkus Reviews)
"A few of the episodes build to moments of hilarity, and Martin's gift for comedic metaphor is uniquely his own." ( The New York Times Book Review)

What listeners say about The Pleasure of My Company

Would you listen to The Pleasure of My Company again? Why?

yes! just did not want it to end!

enjoyed it very much laughed a lot

The Pleasure of Listening This

Enjoyed this book very much, actually have listened to it many times. Martin is sophisticated and clear reader, and no one could do better job reading this story, which is quirky, human and intelligent at the same time. The characters are observed in a way like someone would watch You and point out the idiotic habits or manners You might have yourself without knowing it until that someone else questions them. Especially this feature spices the listening experience with sudden hilarious outbursts of laughter to human nature while the story goes on in an atmosphere of a mellow summer breeze. Every time leaves me in a good mood.