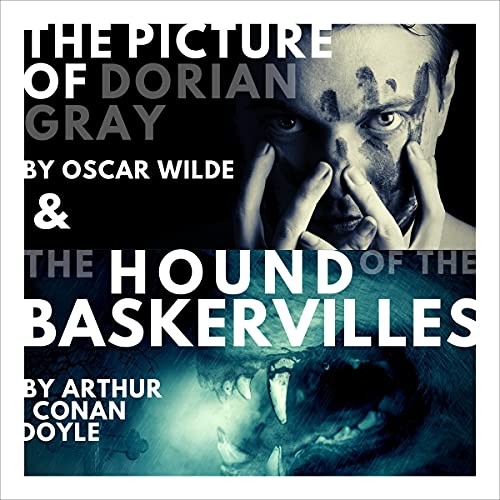 The Picture of Dorian Gray and The Hound of the Baskervilles

The Picture of Dorian Gray

Captivated by the allure of his own portrait, Dorian Gray gives his soul in exchange for eternal youth and beauty. His friend Lord Henry Wotton draws him into a double life of secret vice, while to the world outside he preserves his immaculate facade. As his hidden portrait becomes uglier with each new sin, Dorian begins to lose control, and his past comes around to haunt him.

Oscar Wilde's only novel is half gothic horror, half morality tale, and is as timeless as his plays and poems. First published in 1889, this unabridged audiobook edition narrated by Jake Urry captures the wit, the charm, and the horror of Wilde's most controversial work.

A country doctor arrives at 221B Baker Street and presents Sherlock Holmes with an old local legend and a new cryptic mystery. The owner of Baskerville Hall is dead, and his heir, Sir Henry Baskerville arrives from Canada to take over the estate. From the moment he arrives in London, he is warned to stay away from Baskerville Hall by an unknown agent. Sir Henry is unperturbed, however, and Holmes decides to send Watson down to Devonshire with him to report on any developments. Is there any truth in the legend of a huge spectral hound that has haunted the family for generations? Or does the truth lie with one of the enigmatic characters in the surrounding area?

Perhaps the most well-known outing for Arthur Conan Doyle's beloved Sherlock Holmes, The Hound of the Baskervilles has all the ingredients of the coziest of mysteries. Jake Urry brings this head-scratching tale to life in this unabridged telling of a timeless classic.