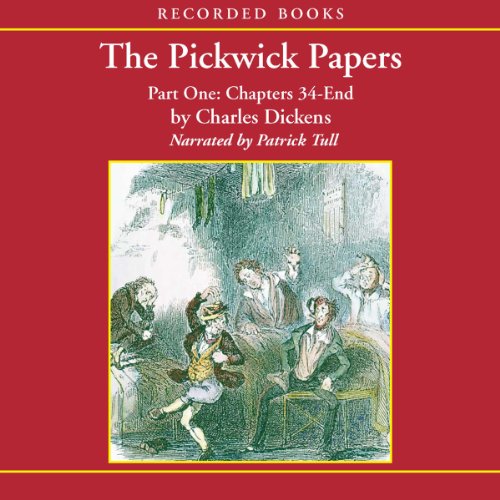 This second installment of Charles Dickens’ 1837 novel The Pickwick Papers sees the members of Samuel Pickwick’s traveling society continuing to relate their adventures in London and the English countryside to one another.

This volume begins with one of the most hilarious tour de forces in English literature: Mr. Pickwick’s trial for breach of promise of marriage to Mrs. Bardell. Other developments include Mr. Pickwick’s two-month stay in Bath, Reverend Stiggins’ comeuppance from Tony Weller, and Snodgrass’ developing relationship.

Patrick Tull brings comic energy and a facility with English dialect in his fluid performance of a comic masterpiece.

Enjoy the further adventures of the delightful Samuel Pickwick, bon vivant and chairman of the Pickwick Club, as he faces confinement in Fleet prison. Finally, learn how the Pickwick Club is disbanded and everything is settled, amazingly, to the satisfaction of everyone involved. Charles Dickens considered this classic novel to be his greatest work.
Public Domain (P)1999 Recorded Books

What listeners say about The Pickwick Papers, Volume 2

The Narrator brings to life the characters of Dickens and makes them leap off the page. The pace is perfect and the Voice of Mr Till never wearies the listener. A perfect audio book..enjoy

Patrick Tull does an amazing job of bringing this classic to life. Really superb. Probably the most enjoyable audiobook I've ever listened and it didn't lose it's appeal despite being over 30 hours long.

Read the way it was meant to be

- This is simply a repeat of what I wrote for Volume 1 -
The Pickwick Papers is a very funny book, and it's no surprise it is loved to this day. What has made this book extra special to me is Patrick Tull's reading of it. He narrates the story and plays each character with a style and energy I think would be exhausting to imitate. I have to admit I don't love the recording quality that much (it's a little too strong in the mid-range). But the life Tull's performance gives to the book allows me to overlook this minor technicality. This is a must-have in your collection!

Remember that this is Dickens' first stab at writing anything for publication, and he's just a teenager. The book is anecdotal rather than all of a piece. You'll scratch your head as you try to find a common thread running through it, but as a taste of the young Charles Dickens who matures in his subsequent books, the Pickwick Papers is where it's at.