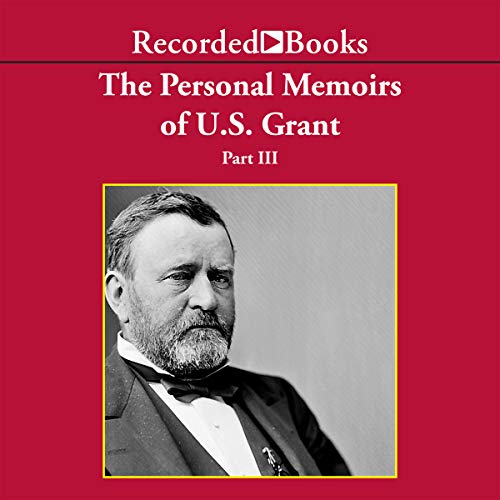 By: Ulysses S. Grant
Narrated by: Peter Johnson
Try for £0.00

In his own captivating words, General Ulysses S. Grant describes the Wilderness Campaign, the almost anti-climactic surrender of General Robert E. Lee at Appomattox, and the assassination of President Abraham Lincoln. His depiction of the most crucial and hardest-fought battles of the Civil War, the near-disasters, and the bloody triumphs reveals a highly intelligent, profound, thinking man. Grant wrote his memoirs as he lay dying of cancer and completed the manuscript only a week before his death.
Public Domain (P)1999 Recorded Books, LLC
Military & War
Show More Show Less

"The best [memoirs] of any general's since Caesar." (Mark Twain, publisher of The Personal Memoirs of Ulysses S. Grant)

What listeners say about The Personal Memoirs of U.S. Grant, Part 3

Peter Johnson’s Reading of The Personal Memoirs of Ulysses S. Grant is second to none. Truthfully, my only complaints are that it was divided into three parts, each requiring a separate purchase when it could easily have been condensed to a single work (even the original printed book was published in only two volumes) and that the recording is divided into “chapters” (more correctly “tracks”) based apparently on length, as they do not correspond at all to the actual chapters as Grant wrote them. Otherwise, it is thoroughly enjoyable.

I've long wanted to read U..S. Grant's military memoirs . Brilliantly written by a man dying of cancer... A humble man who came from obscurity to lead his army to victory and become president in a few short years. Narration was well done.. My understanding and admiration of U.S. Grant , the man, already great, have been greatly increased by this top-notch presentation. 5 stars+

Get inside Grant's head as the War concluded.

Not unlike the personal memoirs of many generals and admirals throughout history, Grant's memoirs from the War Years (Parts 2 and 3) recall his thoughts at the time, whether before, during or after the many famous battles of the Civil War, including the dramatic conclusion at Appomattox. Viewed through his eyes and personally written by him in his last months of life, it has a fantastic level of detail and insight and is a valuable addition to the substantial literature on this true American hero. Derided as a drunk and a failure in business and politics by some, he was in fact Lincoln's and the Union's last hope for ultimate victory and his integrity and humanity never failed. His leadership and strategy in creating that victory speak for themselves about this humble and courageous military genius.

Just pull this string as i walk away

Grant unravels the mythology of the Lost Cause in plain talk. If you want to destroy my sweater..

given the current state of our country The clash of cultures in many other unfortunate things that we are still struggling with this memoir by Ulysses s Grant is perfect. is inspiring it is educational it is concise and well-written. considering that he was riding this at the very very end of his life the way in which he writes the stories that he tells about such a time of formation in our country's existence is simply important. and that importance cannot be overstated