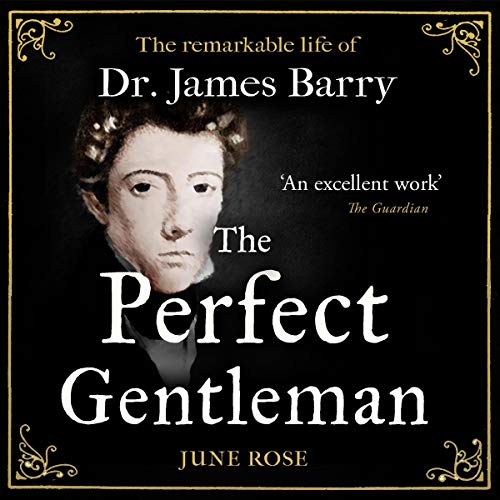 James Barry was one of the most outstanding doctors of the 19th century – a brilliant surgeon, a tireless campaigner for medical reform, and a compassionate Inspector-General of the Army.

But throughout a long and distinguished career an air of secrecy, even of scandal, always clung to Barry. The shrill voice, the diminutive build, the almost ostentatious humanity – all struck a discordant note in the stiff, conventional world of the officers’ mess. Only after the doctor’s death in 1865 did the incredible truth come to light:

Dr. James Barry was a woman.

What was her real identity? How did she manage to conceal her sex from the army for forty-six years? Why did she take on a man’s role and a man’s work?

In this vivid and meticulous biography, June Rose pieces together the clues in the Barry mystery and comes up with some astonishing answers. She tells of the elite intellectual circle which first conceived the masquerade and sponsored the little girl’s entrance, in disguise, into Edinburgh University; she recounts Barry’s strange connection with a powerful aristocratic family and her intense relationship with Lord Charles Somerset, Governor of the Cape Colony and one of the few men to know her secret.

And, most fascinating of all, she provides rare insights into Barry’s unique and contradictory personality: her determined clashes with authority, her courageous endurance of appalling conditions in every corner of the globe, her unforgettable encounter with Florence Nightingale.

The Perfect Gentleman is the story of an extraordinary adventure – and a remarkable woman.

"June Rose has succeeded in re-creating the past and relating it to the present... a fascinating account." (Times Literary Supplement)

June Rose (1926-2018) was a writer and broadcaster who specialised in probing into the human and historical background of the social issues of the day. She authored several biographies, including Marie Stopes and the Sexual Revolution, Elizabeth Fry, the 19th-century prison reformer and Modigliani, the 20th-century Italian painter and Susan Valadon: Mistress of Montmartre.

What listeners say about The Perfect Gentleman: The Remarkable Life of Dr. James Miranda Barry

thoroughly enjoyable right through to the end. a true hero. if only I could say thank you in person