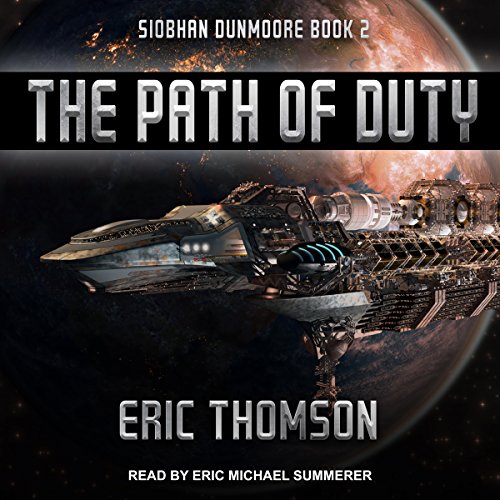 The Path of Duty

By: Eric Thomson
Narrated by: Eric Michael Summerer
Try for £0.00

Duty, honor, loyalty. What meaning did those words still hold in the midst of a stalemated interstellar war where the difference between the enemy and one's own leadership was sometimes paper thin? Unfairly relegated to punishment duty far from the battle lines and still pursued by her past, Siobhan Dunmoore was ordered to sail her ship deep into pirate-infested space on a quest to restore the Navy's reputation after she failed to stop an attack that destroyed a civilian freighter.

There, she hoped to find clues that might absolve the crew of the Stingray from blame, but instead she was sucked into a vortex of intrigue and treachery that threatened not only all of their lives but the future of the embattled Commonwealth. In the midst of competing schemes for supremacy, fending off marauders, mercenaries, and spies, Dunmoore had to find a way to get her people home safe and beyond the reach of powerful cabals that had burrowed their way deep into the heart of the Admiralty. If her ship was to survive, she had to find the path of duty, no matter the personal cost, even if the price she had to pay was her own existence.

What listeners say about The Path of Duty

Exceptional sequel to a brilliant series

Path of Duty is an outstanding Procedural Military Sci-Fi story, once again following Commander Siobhan Dunmore. Although she is a Commander, she is currently the Captain of the Stingray, the last of the Type 203 Frigates on the Front. In the first book, Dunmore was given the Stingray more as a punishment, as the ship was a total disgrace, its former Captain having been a coward, a bully, and a stain on the good name of the Navy.
Dunmore not only rallied the crew, she manages to clear out the rest of the bullies, spies, an criminals that infested the ship, and bring about the downfall of the previous Capt, who had, prior to Dunmore, managed to protect herself thanks to family connections, allowing her to nearly destroy the morale of her crew.
Now, thanks to their stunning victory in the first book against the Imperial Empire, Dunmore, and the crew of The Stingray, are able to hold their heads up with pride.
In this 2nd book, however, Dunmore has been moved to another Admiral to protect her from backlash from ‘family connections’, and as a result of various things,
Without giving a lot of the story away, the Crew are relegated to Convoy duty after failing to save a civilian freighter that comes under attack by an alleged pirate ship. However, whilst on the Convoy duty, Captain Dunmore and the crew of the Stingray are pulled into this web of intrigue, lies and politics, one in which no one knows what is the truth, and in which it reaches all the way back into the highest parts of the leadership.
Dunmore is suddenly faced with some very real challenges, and having battled through these challenges in the past and come out with some very real scars, both mental and physical, she is not sure if she is capable of making the right decisions this time around. Thankfully, she has a decent 2nd Officer with which to lean on, thanks to their new bond.
This is a really gripping, fascinating read, in which the story is gritty and realistic, and the characters are just absolutely exceptional, with intense and believable dialogue, you really feel you could be standing in a ships ops room whilst they discuss these things. The procedural nature of Thomson’s writing is just brilliant, and creates such an in-depth and complex look at how the action, and the particular scenario that he is trying to tell, plays out, not just telling that particular bit of the story, but it creates this overall feel for the entire book, you become really engaged with the characters and what happens to them
Dunmore’s character is again, outstanding as the deeply troubled war-veteran, who has seen far too much for her young years, but she is also incredibly experienced. This makes her both an incredible asset, but also a dangerous liability, in that she can be arrogant, believing she has all the answers, It can also make her stubborn, failing to back down when she is faced with insurmountable odds, simply because she refuses to back down. It makes for a very intense read, as you get totally caught up in the psychological aspect of the story, as well as the really impressive Military Sci-Fi aspect of the story as well.
Dunmore’s other crew, Pushkin, her devout 2nd Officer is just outstanding, as is Kowalkski, who was rather belligerent in the first book towards the Captain, but has soon come around to be a fantastic officer who fully respects her Commanding Officer. There are several others as well, too numerous to recount, but needless to say, Thomson creates a wide range of clever, well developed characters, to tell his story, driving the main story line, whilst also relying on the procedural aspects of Mil Sci-Fi to allow for an intriguing, and fascinating story of one Captains drive to look after her crew at all costs.
This is a must read series, for those that love Mil Sci-Fi, a good psychological thriller, any form of Sc-Fi, or just a good story, because that is what The Path of Duty is, a very good story of one Captain staying the course.
The Narration is beyond brilliant. Eric Michael Summerer tells a wonderful story, narrating with a very clear and easy to understand voice, so that you can easily understand everything he is saying. He has very good pronunciation, speaks clearly, and uses a good range of male and female voices, that have distinctive ranges of their own, such that you can distinguish between characters (both male and female), that he is using, so well that there is no need to say who is talking. This is a great Audiobook, and is worth listening to. This is one book in which it is better to listen to it rather than reading it!

Just so so. The author has definitely fallen in love with certain adjectives. "Sardonic" or some derivative thereof was used to distraction. I like the mystery aspects of the stories thus far, but Captain Dunmore does not seem to be a well defined character, particularly in this story. At one minute a paragon of military honor, the next being seduced into an obvious coup plot (by an Admiral who is the love child of Col. Kurtz and a pandering used car salesman) and then abandoning her "dearest oaths."
A brilliant commander with an "agile mind" in one instance and a thick idiot the next. There seems to be little consistency to Dunmore other than her ability to blush (in response to virtually every emotion)

Where does The Path of Duty rank among all the audiobooks you’ve listened to so far?

Great space adventure. Got into the story and couldn't stop listening.

What was one of the most memorable moments of The Path of Duty?

The reveal of the spy.

Which character – as performed by Eric Michael Summerer – was your favorite?

The end conversation with the lead and the admiral.