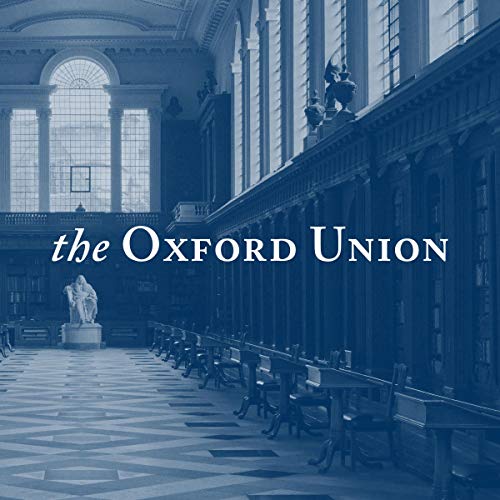 The Oxford Union on Audible

What listeners say about The Oxford Union on Audible

Sounded boring. Thumbnail picture looked boring. Title was boring. I downloaded it because it was free, expecting to only get 10 minutes in and proving to myself if was dull.

However it was a good listen. The first one is Paloma Faith and it was a cracking listen - honest, raw, insightful, intelligent and funny. I was hooked ! Some sessions are in the form of a speech to students followed by a Q&A and some are just Q&As but I liked them all. I learned a lot from all the speakers and even discovered a movie I wouldn't have considered before thanks to Twinkle Khanna, the last speaker.

Not stuffy and archaic at all. I prejudged - sorry Audible and sorry Oxford. I loved them and hope this is a regular offering.

celebs opinions are not unfalliable

these celebs are treated as if their opinion is God given. I hated vera wang dismissing the guy who bought up how exploitative unpaid fashion internships are only to be told you just have to try harder. I also hated elen pompeos remark she would slash Harvey Weinstein across the face with a glass if he tried anything and that he was only professional with her. Has she never heard of the freeze response?! when faced with an assailant who is twice your size you think that fighting him will only anger him more and make him hurt you more so you just freeze and hope it's over soon. if you cant flee or fight your brain goes into a disassociate state of freeze so you can mentally check out as much as possible from the trauma that's about to occur. youre like a deer in headlights. I hate that this platform makes celebs opinions seem soooo mightly important. Honestly they need to get out of their bubble and get educated about a few things.

loved finding these interviews with surprising people of note- why is this not more widely known about?!

I love the oxford union and the array of extraordinary characters they bring to speak.

Generosity of spirit from a humble champion

Too much female politics in theses lectures, seemed to be preaching it in every other presentation. Sometimes subtly sometimes not. Let them eat cake class who superimpose some indignity to make themselves virtuous. Leadership by postcards and posters, not their own footprints,. breathe don't spit your values

it makes me feel clever

I'm home educated and a non conformist who despises posh people so I've given it one star for everything.
but it wouldn't let me 'submit' with the one star for all three catergories, try it for yourself. x

Some of the early episodes didn't even manage to keep me awake but some of the later ones were excellent. Not enough scientists, innovators and world changers. Financial success seems to be a qualifying attribute to speak over talent and bravery. Some commendable speakers but overall a little disappointing.

Complete waste of time. Glad I didn't pay for it.

Complete waste of time. Glad I didn't pay for it. Drags on. Tbh, I did wonder was she high or drunk, or both.