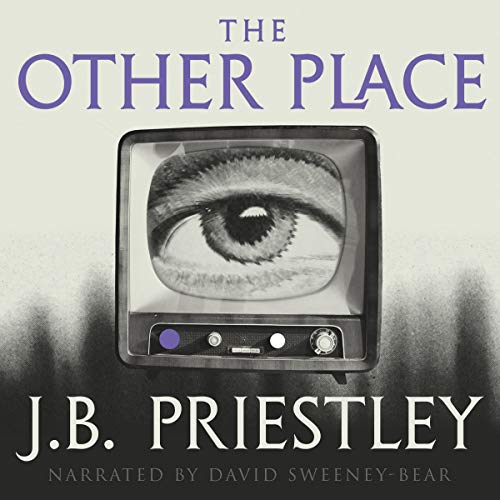 The Other Place and Other Stories of the Same Sort

The Other Place and Other Stories of the Same Sort

By: J. B. Priestley
Narrated by: David Sweeney-Bear

"These stories say something meaningful, as well as relate an anecdote. They are not only examples of narrative skill, but exhibitions of social truth." (Saturday Review)

"Priestley is one of the finest and most popular storytellers of the last hundred years. We are now aware many of his stories have a prophetic quality." (Dame Margaret Drabble)

J. B. Priestley (1894-1984) was a versatile and prolific novelist and playwright, but in The Other Place (1953), he shows an unexpected talent, proving himself a master of the weird tale. In "The Grey Ones", Mr. Patson visits a psychiatrist after he becomes convinced that a race of demons masquerading as men are plotting the overthrow of the human race...but what if he's not insane? In "Guest of Honour", a banquet speech becomes a horrifying affair when the keynote speaker realizes his audience is made up of monstrous and menacing creatures. "The Leadington Incident" recounts the disturbing experience of a cabinet minister who suddenly perceives that though the people around him move and talk as though alive, they are all actually just animated corpses or sleepwalking zombies. The nine tales in this collection are strange, fantastic, and often unsettling, and they represent Priestley at his best.

I had not heard of J.B Priestley but was always game for weird short stories and these did not disappoint. Strangely sinister and often supernatural, these tales reminded me of episodes of the Twilight Zone. The narrator provided distinctive voices for different characters which made listening to the tales an enjoyable and engrossing experience. "Uncle Phil on TV" was absolutely my favourite.

I found listening to these short stories most absorbing and gripping. I particularly enjoyed listening to "Night Sequence" , " The Statues" and " Uncle Phil on TV". The narrator managed to put just the right amount of energy into narrating these stories so that the listener's attention is held and maintained throughout the story and doesn't flag towards the end. Also he uses his voice in a way which makes it possible for the listener to be able to distinguish and relate to each of the different characters present in all of the short stories.

An interesting midcentury collection of the Weird.

An interesting midcentury collection of the Weird. Thematically, this collection is about the fears of the expanding middle class and the erosion of the gentry. There is a particular disdain for bureaucrats and politicians. “Guest of Honour” almost a great weird destruction of reality corporate horror collapse of the class system, but it feels like the test audience required that a heartwarming ending with a redemption message be tacked on. “The Statues” feels like a metaphor for the fears of the immigrant class moving into the UK and making it home.

Probably my favorite of the bunch is “The Grey Ones,” which is a nice precursor to THEY LIVE with paranoia bubbling up from the Red Scare instead of rampant consumerism. Also, I loved the takeover mechanism of evoking ennui. I loved the gentle audio production in “Uncle Phil on TV” as tweaking the voices from the television into a flatter sound works so effectively for verisimilitude.

I love classic stories from a new genre and so when I got this short story collection I couldn’t wait to get started. I was not disappointed with the exception of two of the stories that made absolutely no sense to me but was still humorous it really was worth the read. My favorite was Mr. Smith who thought demons were ruining the world that was pretty hilarious. The only reason I didn’t give it five stars is because of the two story that made no sense to me. Although I did still find one of them really funny I just didn’t get the block. Other than those two stories this book is totally worth it!