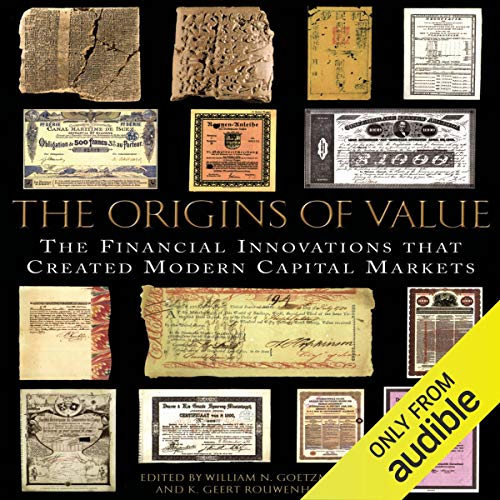 The Origins of Value

From the invention of interest in Mesopotamia and the origin of paper money in China, to the creation of mutual funds, inflation-indexed bonds, and global financial securities, here is a sweeping survey of financial innovations that have changed the world.

Written by a distinguished group of experts - including Robert Shiller, Niall Ferguson, Valerie Hansen, and many others - The Origins of Value traces the evolution of finance through 4,000 years of history. Listeners see how and why many of our most important financial tools and institutions - loans, interest rates, stocks, bonds, mutual funds, the corporation, and the New York Stock Exchange, to name a few - came into being. We see, for instance, how ancient Rome developed an early form of equity finance that resembles the modern corporation and read about the first modern corporation - the Dutch East India Company - and its innovative means of financing the exploration and expansion of European business ventures around the globe. We also meet remarkable financial innovators, such as the 13th century Italian Fibonacci of Pisa, whose mathematics of money became the foundation for later developments in the technology of Western European finance (and may explain why the West surpassed the East in financial sophistication). And we even discover a still-surviving "perpetuity" dating from the Dutch Age of Reason - an instrument that has been paying interest since the mid-17th century. Placing our current age of financial revolution in fascinating historical perspective, The Origins of Value tells a remarkable story of invention, illuminating many key episodes in the course of financial history.

What listeners say about The Origins of Value

A treat for financial history fans

I already have this book in print -- which has gorgeous color plates of many of the financial instruments described. If you like works such as Niall Ferguson's 'Ascent of Money,' Jack Weatherford's 'History of Money,' or Philip Coggan's 'Paper Promises' (each available at audible), then you may delight in this. (Niall Ferguson wrote one of the segments here). Here we get financial concepts wrapped in a developmental story, indeed in their stories of origin (as best our scholarship can tell). Those familiar with tales of John Law and Dutch financial innovation will yet find fresh perspectives. But this book digs further back, with translations for example of cuneiform business records from the Near East, a few thousand years BCE (as far back before the year 1 CE, as we are after that date)! The pace slows down a few times, as for example during recitations of terms of several loan deals in that ancient setting. If it bogs down, it doesn't for long, and we are treated to work of many fine authors. But this overall hits the sweet spot for me, between brisk walks through straightforward financial ideas and teminology, scenes of business history (with bits of historical coloration to keep it interesting, but always generally sticking to the point), commentary about meanings and impacts of all this in history, and the fostering of a deeper comprehension of today's financial innovations.