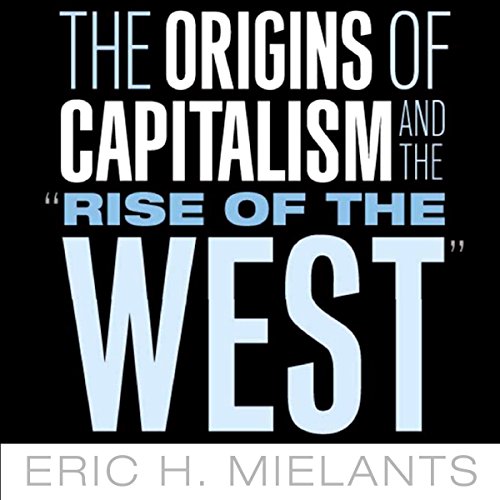 The Origins of Capitalism and the "Rise of the West"

Eric Mielants provides a fresh, interdisciplinary interpretation of the origins of modernity in general and of capitalism in particular. He argues that, contrary to established thinking, the "Rise of the West" should not be examined through the lens of the Industrial Revolution or of the colonization of the New World but viewed through long-term developments that began in the Middle Ages. A fascinating overview of civilizations in East Asia, South Asia, and northwestern Africa is provided and then systematically compared to developments in Europe at the same time. Utilizing this analysis, the book addresses some of the most important current debates in world history, comparative sociology, political economy, sociological theory, and historical sociology. Mielants uncovers the ways that existing theories (such as Marxism, World-Systems Theory, and Smithian Modernization Theory) have suffered from either Eurocentric or limited temporal and spatial analyses, preventing them from fully explaining the reasons behind the emergence of capitalism in Western Europe.

If your taste runs to a dry and academic style (which fits fine here), and the topic seems interesting, you will find yourself rewarded. This did broaden and deepen and flesh out my impressions and views of the times and people covered, in Europe and Asia. The approach is a more modern one which openly addresses itself to various other historical schools, and employs an updated view of the development and big picture regional and global economies.

narrated by a robot. author is somewhat confused.

This isn't bad for a short introduction to different theories of the origins of capitalism. It does good overviews and is indeed short. However, the criticisms within miss out on something fairly critical in understanding the method and intention of the authors criticized. When Adam Smith or Karl Marx is not covering the wide variations of pre-modern development, and every single conceivable case involving the roots that later developed into capitalism, it is not because they didn't know they existed or missed them in their analysis. They are deliberately omitted because the authors have a specific goal in their texts, which are polemical. They are modeling the outlines of a process over time to highlight certain key elements of that process and to create a model.

These systems are made up of people and regions that have differences, but the goal is to simplify that as much as possible to show the general trends. Adam Smith is trying to show the model the system as a bunch of buyers and sellers in a market. They clearly had other roles, purposes, tasks and obligations within the political economy of the day, but he's trying to model why a mercantile system of protectionist tariffs actually leads to worse outcomes for people in all countries than allowing different nations to do whatever they did best and compete globally to get the best and cheapest products for all. Anything outside of that polemic are not relevant to his analysis, so they are left out.

Marx is taking Adam Smith (and David Ricardo and others) and using their analysis of the 'everyone is a buyer and seller' model to refocus his analysis on the role of production, and the relationships there, and how the production of commodities is the basis of the capitalist mode of production, and working out from there. His modeling of the pre-capitalist period is trying to trace how it gets to that point, commodity production dictating everything else, and thus uses broad strokes of feudal development to show the general trend. He's also using the same models of previous authors of political economy like Adam Smith as a beginning to trace what they get right and wrong, so is also bound to the limits of their models in his own. He's not setting out to write a history of all variations that may have occurred earlier than most others, or to explore how actually there were some pre-capitalist regions that were slightly ahead of others in the forms of pre-capitalist development. The same is true of Brenner's peasantry arguments and world systems theory. These are simplified models of development, not histories.

Can’t say i learned a thing from this book

Capitalism is a thoughtful philosophy. The men and ideas that originated this philosophy were not mentioned nor were historical forces and events that freed men to conduct voluntary economic exchanges.Instead you find 100’s of actives all over the world at many times that are very vague and not organized in any systematic way that i could discern leaving me with nothing to take away.Maybe in some extreme academic circles somewhere there would be something relevant in this book.