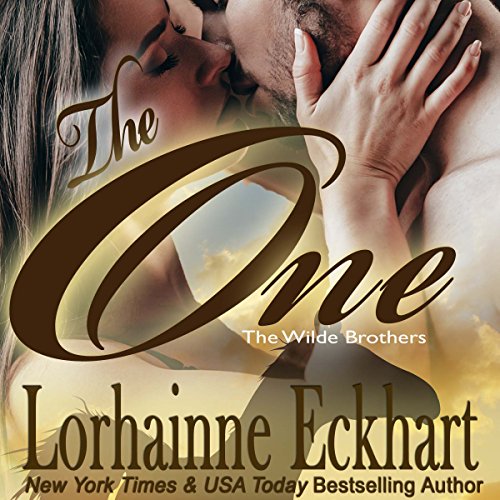 By: Lorhainne Eckhart
Narrated by: Lyssa Browne
Try for £0.00

You never know when you'll suddenly meet The One!

In The One, Margaret Gordon was a prominent Seattle surgeon until a slip of her knife left a young boy without a future. After being fired, she returns to her family ranch, the perfect spot to hide out from everyone and lick her wounds, with no one around but her horse.

Margaret has never considered herself a horse person. In truth, though, she understands horses better than people. When Joe Wilde, a widower, drives up one morning with a teenage boy and a horse with a problem, Margaret turns into the klutzy misfit she used to be, and the torch she silently carried for Joe all through school is rekindled. However, when smooth-talking Joe convinces Margaret to work with the temperamental horse, she grows closer to Joe's son, Ryan, and soon learns the horse's issues are rooted in problems between the two--especially Ryan's anxiety over the fact that his father is now dating a woman who's only interested in the sexy Joe Wilde, not his misfit of a son.

Ryan wants Margaret to be his mother, so he takes matters into his own hands, setting Margaret in his father's path every chance he gets. Even though sparks fly and sizzle between them, Joe believes Margaret has despised him all his life, and he decides all his rebellious son needs is a mother. When Joe proposes marriage to the wrong woman, his son takes off into the wilderness with only a backpack and a feisty horse.

To Joe's surprise, it's Margaret who saddles up her horse and heads off alone with him over a hundred miles of wilderness in a race against time and the elements to find his son. With Ryan's life in jeopardy, will Margaret be able to put aside her differences with Joe and realize that he's The One?

What listeners say about The One

I love a well written book and this is one of them. This is the first one I've read by this author but it won't be the last.

this book was just perfect. i love listening to the shorter audiobooks. the story was interresting and the characters felt real.

A good beginning to the series

This is a great start in The Wilde Brothers series.
The story of Margaret Gordon and Joe Wilde is at times heartbreaking . She is a doctor who still can’t forgive herself for losing a patient and has isolated herself in her grandfather’s ranch. Joe Wilde is a widower with a troubled son. A boy she helps as she works with his temperamental horse.
It’s a story about family , misunderstandings, feelings of guilt , and hope.
Will Joe and Margaret be able to overcome the obstacles they partly create, or will fears hold them back?
The plot is engaging, the characters complex , stubborn, and strong.
The narrator of the audiobook was very good.
Looking forward to more stories in this series.

Entertaining and interesting fare about a disgraced doctor and a ruthless cowboy from her high school years.

I didn't like this book
it just wasn't my style . I'm sure there are lots people who will enjoy it.