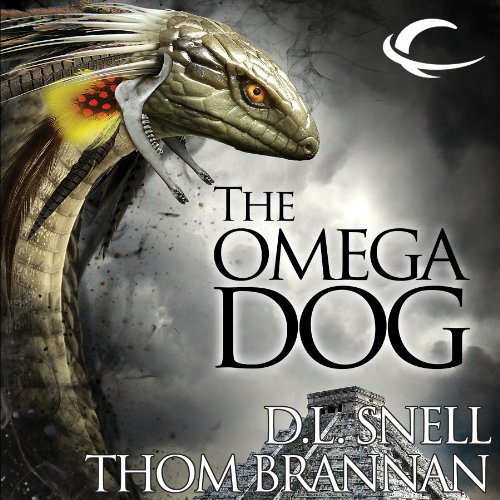 Nothing can compel sensible people to journey among shape-shifting creatures, zombies, werewolves, mythological beasts, and mutants, only to force themselves into the remaining pocket of "civilization" - that happens to be headed by a ruthless, drug cartel kingpin. Nothing, that is, except the love of a father for his children. Multi-audiobook award-winning performer Jonathan Davis vividly creates the wild, horrific (with occasional shots of humor, and a bit of romance, too) world drawn from the dark imaginations of co-authors D. L. Snell and Thom Brannan in the sequel to their widely-acclaimed < i>Pavlov’s Dogs.

In the aftermath of Pavlov's dogs comes a mysterious figure.

A stranger appears in the dark of the Mexican desert. They say he can change his face. He could be anyone, at any time. And they say he can bring the dead back to life. A killing machine on the brink of life and death, a monster, self-aware, dangles at the end of a puppeteer’s strings, forced to help the very man he seeks to destroy.

An epic journey south, twisting and turning through hordes of zombies, cartel territory, Mayan ruins, and the things that now inhabit them, a group of survivors must travel to save one man’s family from a nightmarish third world gone to hell. But this time, even best friends have deadly secrets, and even allies can’t be trusted - as a father’s only hope of getting his kids out alive is the very thing that’s hunting him down.

What listeners say about The Omega Dog

Yo no hablo espanol.
There was quite a bit of Spanish in this book, so I was lost. I really liked the first book and I just knew book 2 was gonna be as good as the first one. But no, it was not. I thought I was getting werewolves and some zombies but no, it had only alil of that. To me the story was all over the place, and it became hard to keep up with. I didn't like the extra that was added to the book either. I could've done without it. I was hoping for a good listen, and disappointed that I didn't get it.

What disappointed you about The Omega Dog?

In the 1st book, the dogs were heroes. This book made the 1 dog left a villain. It also introduced a fantasy story-line off the zombie path.

What character would you cut from The Omega Dog?

everything to do with the Mians and mythical creatures