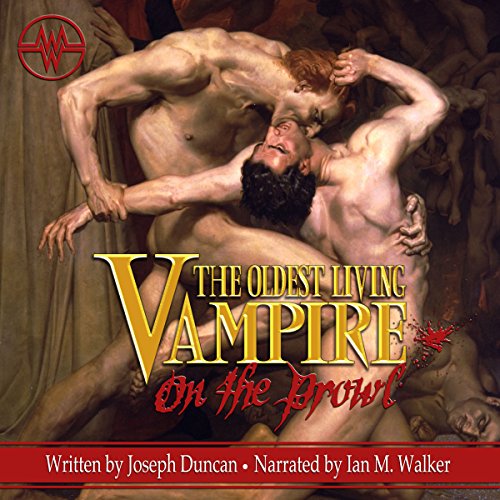 The Oldest Living Vampire on the Prowl

In modern-day Belgium, the vampire Gon has kidnapped a ruthless murderer. Lukas Jaeger is a cunning sociopath, a monster in the guise of a man. Lonely and fascinated by his hostage's inhumanity, Gon strikes a deal with the seductive serial killer: his life story in exchange for the mortal's vile tales. So long as Gon is intrigued, his captive lives on.

As their Faustian bargain unfolds, the Oldest Living Vampire tells Jaeger of his rebirth in the icy steppes of Europe following the last glacial maximum, the creation of his first vampire companion, and their battle with the Elders of the Oombai, a burgeoning agricultural society....All the while, his thirst for the captive mortal's blood grows more and more irresistible.

What listeners say about The Oldest Living Vampire on the Prowl

I actually thoroughly enjoyed this novel...

I spotted this listed a long time ago, I avoided it simply because it has a bad title. I think perhaps a title more in keeping with the ancient nature of the author would have been more appropriate.

I have read the first volume prior to this and found it equally enjoyable, if not more so.

I unfortunately found the crude perhaps even immature language used on occasion didn't add anything to the story or the 'gravitas' of the imagined author, and could have been avoided entirely. Especially the story of the Vampires vile captive. I found it vulgar.

That being said I thoroughly enjoyed listening to the Vampires early human history, his 'turning' and early vampire life. I look forward to the next volume. If I were the author I would release the next volume with a re-release of the other two with more appropriate titles.

The wrter has a great premise and a vast expanse of time to write several installments. His writing style is engaging and captures the reader. In this installment much too much time is spent rehashing the initial book.

The books themselves are so unique and and Ian 's voice I think, grabs the personality of Gon so well. it was the voice I heard when just reading the books!

a little too much homo erotica for me

Would you ever listen to anything by Joseph Duncan again?

probably not. he excuses his writing style by saying the main character is not a very good author...

I truly did enjoy this book. It is a marvelous tale, I only wish there was more on audible.

I liked hearing his story. And I felt bad for him at times. When the vamp went to get revenge I actually felt worried for him how silly. I want to hear the next book

I need more...this is a series I really have enjoyed when is the next one???

As good as the first story. I can't wait for the others to be set to audiobook! Ian M. Walker breathes life into Gon. He has a way of inflection that adds dimension and drama to a moment.