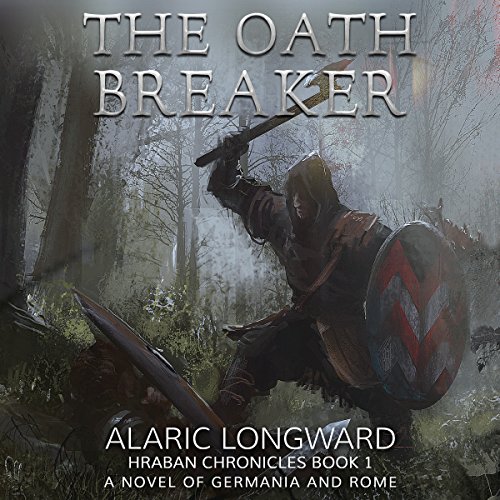 The Oath Breaker: A Novel of Germania and Rome

Hraban the Marcomanni has never met his father Maroboodus, exiled in far-away Rome, but this is about to change.

In the age of early Roman Empire, Augustus is creating his legacy with gladius as the legions begin the arduous work of subjecting the troublesome and divided Germani tribes.

Such great, distant issues do not concern Hraban, a young man bent on becoming a spear lord, giver of rings, a warrior praised in the dark halls of his kin. He is the Raven, and son of great lords. Yet his father's return to their burning village does not only upset plans of Rome and the scheming Germani, but those of Hraban, who finds the ancient virtues of his kin are very strained with strange morals of Maroboodus, his father.

Will Hraban find a way to survive the plots of his many enemies, serve his father, and keep his honor while entire nations struggle to unite against Rome and those who would betray the Germani?

The Oath Breaker is the first book in a new series of historical novels set in the dark lands east of Rhenus and fabulous, ancient Rome.

What listeners say about The Oath Breaker: A Novel of Germania and Rome

Another Masterpiece from Alaric Longward!

Alaric Longward has a way of taking history or mythology, making it his own, and create enthralling stories that always leave you wanting more. In this case, its the Marcommani during the Roman days, and Alaric creates engaging characters, and fleshes out a world that has to be read to believed. I cant recommend this book highly enough. Clay Lomakayu does an outstanding job bringing the characters to life, doing a great job keeping the narration flowing.

I voluntarily recieved a free review copy of this audiobook from the Author, narrator or publisher through AudiobookBoom.

I guess the biggest issue I had with this book was the narrator. The narrator sounds like Columbo. This really took away from being able to focus and really enjoy the book.

I've purchased the entire series and I'm not sure that I'm going to make it through the whole series. I'm going to give book two a chance, but if the narration doesn't improve, I will be returning these.

I very much enjoy historical novels set in Roman times and thought I would give this a try. When I first started listening, I had a difficult time understanding the narrator and wonder if I should just put it aside. Fortunately, I did not and really enjoyed the book. I am just hoping the other volumes will be put on Audible.

oath-breaker is unlike any book I have ever read or listened to. it is a brutal hard-hitting book with more plot twists then one would think possible while keeping the story good. alric longWard managed to do this.

Would you consider the audio edition of The Oath Breaker: A Novel of Germania and Rome to be better than the print version?

The narration, in addition to the writing, brought us into the story. Easy listen. Engaging story. I would definitely be interested in listening to any sequels, as I do enjoy historical fiction.

I was voluntarily provided this review copy audiobook at no charge by the author, publisher and/or narrator for an unbiased review.

the narrator's tone never changed, fight scenes were as lackluster as a description of a background character. I stopped listening 20 min in and just used it as background noise. it was horrible.

The odd cadence of the narration renders the text virtually incomprehensible. I'm no idiot, I don't think at least, but I had an impossible time following the story. I couldn't understand what the narrator said most of the time. I felt like I was listening to a foreign language in which I wasn't quite fluent.

Good story but it took me a minute...

The first dozen chapters were slow for me, mostly because the narration was hard for me to fall into. Eventually I settled in and while for minute, I thought I'd not finish the novel, now I'll finish the series.

The narration was hard to understand. I don’t know if the narrator was trying to effect a Germanic accent but either way it was always annoying and often unintelligible. I finally gave up and just bought the kindle edition.