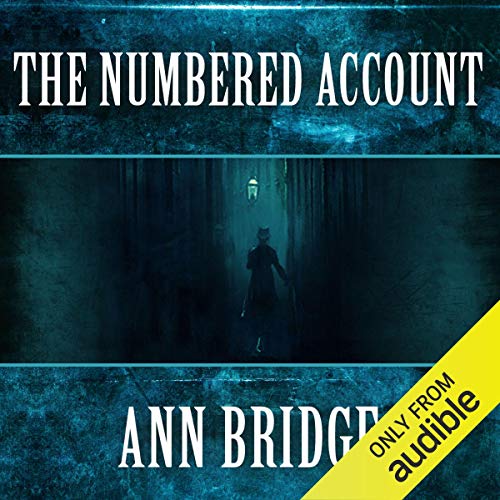 Julia Probyn, like most people, knew very little about anonymous numbered accounts in Swiss Banks. Until her cousin, Colin Munro, asked her to look into the matter of one containing a fortune, for his fiancée Aglaia Armitage, left to her by her Greek grandfather. Then Julia learned a great deal. But besides bonds and debentures, old Mr. Thalassides, proved to have left documents of vital interest to the British Secret Service, and to other Powers as well, in the vault with them. When these disappear, the hunt begins... Ann Bridge brings her characteristic wit, suspense and sense of adventure to the third book in the Julia Probyn series.

Ann Bridge (1889-1974), or Lady Mary Dolling (Sanders) O'Malley was born in Hertfordshire. Bridge's novels concern her experiences of the British Foreign Office community in Peking in China, where she lived for two years with her diplomat husband. Her novels combine courtship plots with vividly-realized settings and demure social satire. Bridge went on to write novels around a serious investigation of modern historical developments. In the 1970s Bridge began to write thrillers centred on a female amateur detective, Julia Probyn, as well writing travel books and family memoirs. Her books were praised for their faithful representation of foreign countries which was down to personal experience and thorough research.

Maybe my favorite of the series. It is the unabridged version, which dramatizes the beauties of Switzerland in a way that becomes a virtual travel experience. As with all Ann Bridge’s characters, there is flavor and insights into experiences as seen through European eyes.

I found Ann Bridge by accident and I’m so glad I did. I find her books quiet and restful but they still keep my interest. I’m learning all about the countries her books are set in and I find myself looking up the places she mentions so I can really understand the logistics of the story. Bridge’s Julia Probyn series is both informative and interesting. Julia is kind and clever but also real. I think Elizabeth Jasicki handles all the accents very well and sounds true to Julia’s character.

Sadly, these Julia Probyn mysteries are rife with gentle, endemic racism and steeped in very conservative sun-never-sets-on-the-empire political thinking. It's too bad, because they're pretty charming in their own way. Julia is a glorious sleepy blonde who looks too stupid to be of any account, but has a fine, curious mind. She is helpful in a volunteer capacity to British intelligence, in between various small romances. They're mildly funny, in an unexacting way, and tidy travelogues as well—but if you are sensitive to racist characterizations or find the unthinking superiority of the upper classes irritating, these books are not for you.