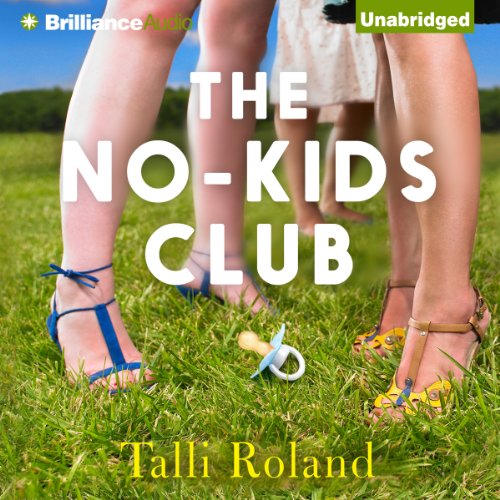 At almost 40, Clare Donoghue is living child-free and loving it.

Then her boyfriend says he wants kids, breaking off their promising relationship. And it’s not just boyfriends: one by one, her formerly carefree friends are swallowed up in a nonstop cycle of play dates and baby groups. So Clare declares enough is enough and decides it’s time for people who don’t have children to band together. And so the No-Kids Club is born.

As the group comes together - Anna, who’s seeking something to jumpstart a stale marriage, and Poppy, desperate for a family but unable to conceive - Clare’s hoping to make the most of the childless life with her new friends. But is living child-free all it’s cracked up to be?

What disappointed you about The No-Kids Club?

Is it too much to hope that the main character Claire, a highly successful professional woman well into her 30s, would have some substance behind her decisions and would be able to be a little bit assertive? Apparently, yes, it is! I found Anna to be pretty pathetic, rather than likeable. I did quite like Poppy. Also, it wasn't very well written or proof read! It was not only predictable, but not worthwhile enough to get away with that.

What was most disappointing about Talli Roland’s story?

I actually really liked her voice for the general narration, but her attempts at accents were shockingly bad! The American accent that became Cornish was a particular low point. I was able to smile since it was bad enough to be amuzing, and it didn't distract me because the other issues with the book were doing that already.

Would you be willing to try another one of Sue Pitkin’s performances?

Maybe, I liked the voice. It would depend what accents might be expected.

It must have had something because I usually don't continue with a book I'm not enjoying.

Review: I love the fact that women who don't want children, not because they can't have them or because they don't have a partner are now being written about, therefore I love the premise behind this book. I really liked the structure as well. Three people with their own lives and issues coming to get her to the No Kids Club all for different reasons and all hoping to get something out of it and becoming friends. This was a totally heart-warming, lovely read that also made you think and carried you along right the way to the end!

I loved Clare's character the most, I think because she was an incredibly hard-working woman as well as someone who didn't want children in her life and so I could really relate to her and loved seeing her represented in this book! I was drawn to ann because I felt sorry for her and because I wanted everything to go right for her. Of course I identified with poppy too because she was a school teacher although I was occasionally jealous that she seemd to actually have time to breathe and eat as well as be at work!

The storyline isn't just about whether someone wants a family or not, it is about these three women and their place in modern society. Over the course of the book you get to see them grow as women, get to see them change and become more accepting of themselves and their choices, it was just a real feel-good read but challenging at the same time. As I have already said, this was a fairly fast paced book, I listened to this on audiobook and it was an enjoyable listen but to anyone looking to pick this up in its ebook form, I really recommend that this goes on your TBR now.

As a member of the Child Free community books on this topic are hard to find. The story starts out well with a woman confident in her Child Free status but succumbs to predictable cultural stereotypes whereby she realises, of course, that she was wrong and her life will of course only be fulfilling if she has a baby... grrr! Maybe I'm a cynic but don't we need books where the "Happy Ending" is not dependent on finding Mr Right and having his babies?! The narrator has a strange voice and some of her accents are questionable. However it didn't stop me listening to the end and enjoying this nice tale of Cheesy Fluff!