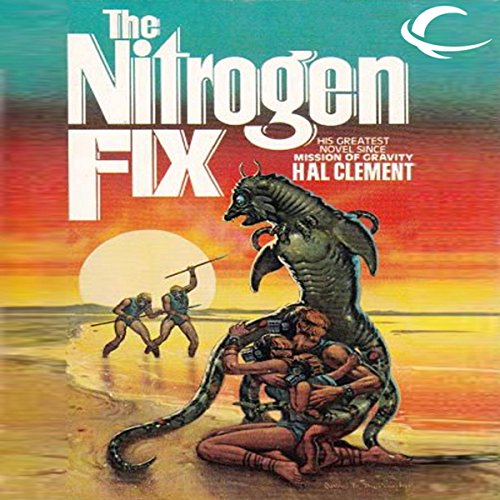 A Nomadic family in the future is allied with an octopus-like alien who can survive in earth's new atmosphere, which has combined with nitrogen. Humans must live in shelters with oxygen-generating plants, or use suitable breathing equipment. Some of earth's original life forms have mutated to survive in the changed atmosphere. Since almost no metals can exist in the corrosive atmosphere, any technology is based on ceramics or glass.

Some humans are suspicious of the aliens, blaming them for the change in the atmosphere since they are adapted to it. The family has an almost fatal encounter with a group of such people, who are holding another alien hostage. However the two aliens are able to pool memories biochemically so that they become the same personality in two bodies. Their combined knowledge and skills help the family to escape. The journey reveals just who the aliens are, where they came from, and why the earth's atmosphere changed.

What listeners say about The Nitrogen Fix

sorry but another miss from clement

this is 2 in a row now that I've struggled with from Clement. I'm sorry but for someone who is supposedly a scifi master story teller, he's not a very good writer. there are interesting elements in this as there were in Ocean on Top, but the actual plot/story line is very poor and all the things i was hoping might happen never occur because the story is bogged down in a very slow ponderous go nowhere plot. the creatures are interesting and could be very cool but they and the entire situation get short shrift by a very simple minded set of events involving capture and escape and capture again or the threat of recapture blah blah. the science behind the story might have made for a good novel but this isn't it. beginning to worry about continuing with clement. i didn't remember thinking Needle was too bad though a tad dated perhaps. and the writing itself is very clunky to my ear.