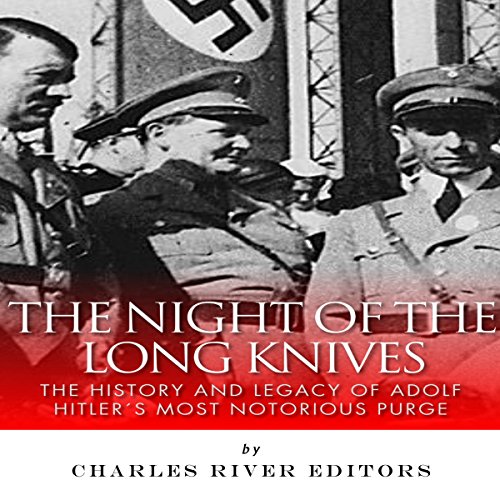 The Night of the Long Knives

Germany's Nazi Party was remarkably implacable in the hostility it showed to the outside world, staunchly opposing both Communism and liberal democracy from the moment of its inception to that of its violent dissolution. The Nazis likewise showed steely, unwavering resolve in their lethal hatred of the Jews, the Slavs, and many others whom they labeled as "untermenschen," subhumans unworthy of rights, cultural standing, or life itself. They pursued their dark vision of "Aryan" superiority with a terrifying clarity and zeal, and they were willing to incur the enmity of the entire world in the process.At the same time, despite this fanatic dedication to their overall vision, the Nazis had their own share of factional strife, and perhaps not surprisingly, the internecine struggle often led to violence, executions, and assassinations, byproducts of a totalitarian environment in which power appeared in its most undisguised and aggressive form. The firing squad, the bomb, the torture chamber, the extermination camp, the crematorium, and the noose of piano wire took the place of debate and persuasion in Hitler's Germany.Like other totalitarian regimes, the leader of the Nazis kept an iron grip on power in part by making sure nobody else could attain too much of it, leading to purges of high-ranking officials in the Nazi party. Of these purges, the most notorious was the Night of the Long Knives, a purge in the summer of 1934 that came about when Hitler ordered the surprise executions of several dozen leaders of the SA. This fanatically National Socialist paramilitary organization had been a key instrument in overthrowing democratic government in Germany.

What listeners say about The Night of the Long Knives

This is a concise history of the Night Of The Long Knives June 30th 1934, where Adolph Hitler decided to kill Ernst Rohm leader of the German SA along with approx 1000 of Rohm's followers. The "Rohm Purge" as it became known, triggered a turning point in
Nazi history. Rohm was once a close friend and confidant of Hitler but the two became estranged as Hitler gined more and more power. This book explains the rift between the two men.World history as we know it took a bloody turn on that decisive day.

This is a short book approximately 90 minutes long but well worth the listen.

interesting to me about what and who the SA really was. The narration was irritating, at best...his pronunciation of the German names was "American-ized" instead of pronouncing them correctly- which is not that hard. He also would take breaths, or pause in completely wrong places and it would change the entire delivery and confuse the listener. The narrator really needs to learn how to do that job....ive listened to so many good ones I didn't ever realize how easy it could be to do a bad job.

The narrator didn’t even make an attempt at pronouncing German and other foreign words correctly. A few times I had to go back and listen again to understand what words were being spoken. Really disappointing!

First of all, if you're dealing with German history, have a narrator that can speak with a German accent. An American accent seems awkward and distracting. Secondly, this story is a horrific and horrifying tale, but none of that was portrayed. In fact, this publication seemed more like a general overview of the Nazi party than a story about the "Night of the Long Knives".

The start of terror

An important lesson in history.. Gives the listener a wealth of knowledge that started the terror that the nazis would unleash the Jews and throw the world into war . A great listen