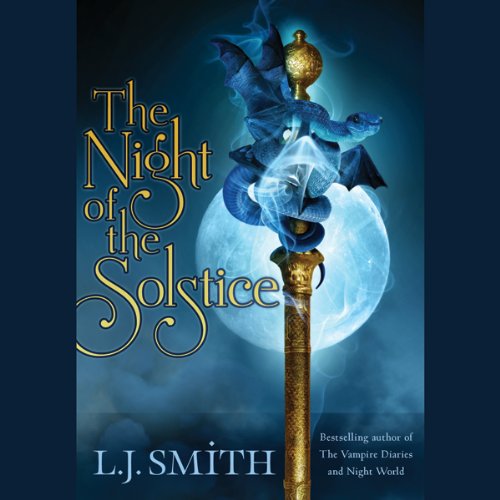 The Night of Solstice

Seven-year-old Claudia has quite a tale to tell: a talking vixen has told her that the sorceress Morgana, guardian of the last passage between our world and the magical Wildworld, has been captured by the villainous sorcerer Cadal Forge, and she needs the help of Claudia and her three siblings. So Claudia, Janie, Charles, and Alys must work together to solve the riddles of Morgana's mansion, travel between the worlds, rescue Morgana, and defeat Cadal Forge. If they are to succeed, the children must grow to trust and appreciate each other as they face off with the magicians of Wildworld, and the adults of this one.

Narrator Khristine Hvam has performed many of L.J. Smith's novels, and it shows; she handles the cast of Solstice and the novel's pacing exceptionally well. Thanks to Hvam’s varied inflections, listeners will easily be able to differentiate between the cast of characters. Perhaps most impressive is Hvam's voicing of Alys and Charles; the character of Alys comes through in Hvam's inflection, and she effectively voices the only boy in the cast. Older listeners may find Hvam’s treatment of 7-year-old Claudia a bit grating, but younger fans or those more accustomed to animation voice acting are unlikely to find fault with it.

The Night of the Solstice is the first novel by Smith, best known for her Young Adult series The Vampire Diaries and The Night World. Night of the Solstice is recommended for grades 5-7, but with a cast so varied there is a character for any young listener to identify with. Seven-year-old Claudia, brave and tenacious; teenager Alys, nurturing and in charge; twins Janie and Charles, brainy and ambitious. In audio, Night of the Solstice should be accessible to children even younger than its target audience, and be easily followed by listeners as young as the third grade set. —Christie Yant

In another age, the pathways connecting Earth to the Wildworld were sealed, forever separating humans from the shimmering parallel universe where legends still live. A great sorceress, Morgana Shee, guards the solitary gate between the worlds. She alone holds the secret of Fell Andred, her mansion built directly on the Great Coastal Passage, whose mirrors are the last doorways to enchantment.

What listeners say about The Night of Solstice

loved it, could see the appeal for children and adults
the voices used were excellent and drew you in further