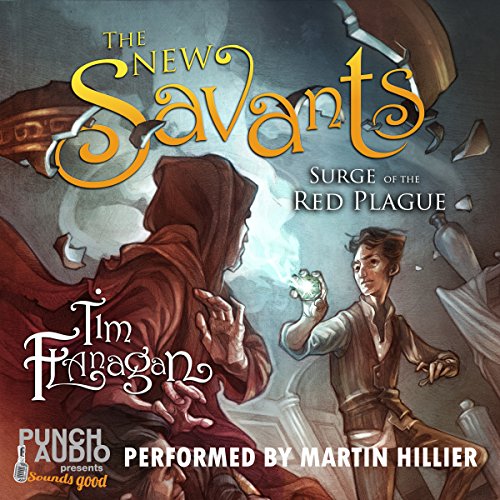 The New Savants: Surge of the Red Plague

By: Tim Flanagan
Narrated by: Martin Hillier,Punch Audio
Try for £0.00

In London lies an underground ghost station - empty and unused. Trains don't stop there anymore, but if you look closely on the tunnel walls, you might just spot a grime-covered sign for Brompton Road Station. Tucked away from the hustle of London streets, the station holds a secret - a government training facility for those select few who are unusual.

After 18 years, the Wicks, Wakefield and Lynch Institute for the Gifted has started recruiting once again! From an early age, Louis Edwards realized that society couldn't accept what it was unable to explain. And no one could explain what Louis was able to do. Forced to repress his gift and hide it from others, Louis successfully manages to lead an introverted life until the day he finds an unusual metal puzzle: the key to a training facility for people just like him.

What listeners say about The New Savants: Surge of the Red Plague

A fresh take on a classic story line

For lovers of authors such as Rick Riodern this is a must listen.

The moral dilemmas and the feelings of isolation and desire to be accepted are told in a powerful yet entertaining fashion.

This is a must listen for all of those who want to be sure of an entertaining and fun listen.

Not quite Harry Potter- but a good magical story :)

The New Savants is a story about young people with special abilities brought together to be trained to use them for good. I thought this was a well written story- and I really appreciated that it was an exceptionally "clean" story. I read a lot of teen lit and I enjoy books about gifted or magical teenagers but I get annoyed when authors include too much bad language, unnecessary violence, or teenage angsty romances. This book had none of those things- just a good introduction to this new series. I gave this 4 stars because I thought the build up to the story took a little longer than necessary- but I'm hopeful that with the backstory out of the way the next book will be more fast paced and a 5 star read :)

This is a great start to a series, and I hope sequels will soon available, because I'd love to know how the story goes on! True, this is completed, but there is potential for at least one sequel.
It's a wonderful YA story, with magic, and children and youths who are different from what is generally accepted as 'normal'.

The idea is great, and I was hooked from the first to the last sentence -- and I'm way past the YA age!
I imagine this could be a great hit with boys and girls: there's young people who don't belong, who have to hide their special gifts, and suddenly, they realize that they are not alone, that there are others just like them, and that their various skills are useful -- even needed--to protect the society that doesn't want them.

Martin Hillier did a fantastic job narrating the story, he's certainly a narrator to look out for.

The story is fast paced (and much too short, I could have gone on listening), yet there's some character development, at the end of the book you have a clear idea of who is who and what the protagonists' strengths and weaknesses are.
I really hope there'll be sequels.

I was voluntarily provided this free review copy audio book by the author, narrator, or publisher.