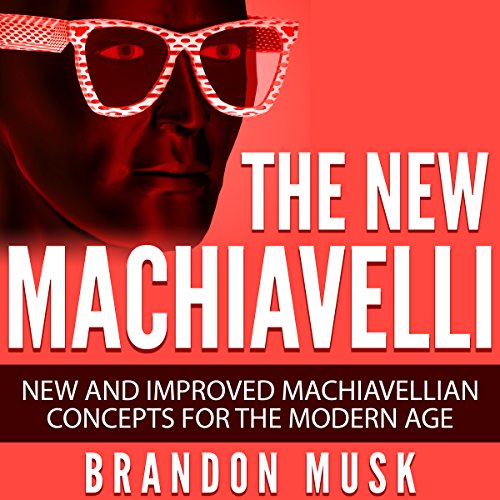 Few books throughout history have been as controversial as Nicollo Machiavelli's The Prince. The ideas that are contained in The Prince are as powerful as they are polarizing. The work was originally intended to pass on the acquired wisdom of the one of the most astute political minds the world has ever known. It was never intended for the eyes of the public but found its way into general release following Machiavelli's death.

The principles within The Prince can be used in many more areas of life than simply the political world. Anyone who's looking to get ahead in life and provide themselves with an advantage over others will find a goldmine of valuable information in this new modern version of the book by author Brandon Musk entitled The New Machiavelli.

This version presented by Musk represents the power and knowledge of Machiavelli's original work updated and improved upon for the modern era in which we live. The book is structured in a way that makes it as useful as possible. Each chapter contains a concise collection of key ideas organized in a logical way. The chapters begin by explaining what Machiavelli originally intended by his words and then proceeds to update each concept for the 21st century. Finally, each chapter shows practical and useful ways of applying the Machiavelli philosophy to different areas of life.

If knowledge is power, then this book is a nuclear weapon. It contains the most devastatingly effective tactics related to influence ever committed to paper. By listening and applying this work, you'll become diabolically effective in any area of life you choose.

Awakenings ahead! Book was interesting and informative.Not for someone who is already morally compromised for this will quicken their up and coming prison sentence!!

Would you try another book from Brandon Musk and/or Jennifer Howe?

I wouldn't seek one out, but I wouldn't avoid one either. Musk is no Malcolm Gladwell for sure. The narration was mediocre even for non-fiction.

Could you see The New Machiavelli being made into a movie or a TV series? Who should the stars be?

I could not stand the narration

I bought the original book because I could not stand the narration. I'm sure the book was great, but the passive yet patronizing voice of the female narrator was intolerable.

an excellent work. Highly practical, witty and addictive. The author is great! Loved it! Thanks.

Seemed like a very sophomoric effort to distill this work down to its essence. Repetitive and often unrealistic examples in the application sections. Was expecting something much more interesting considering the subject.