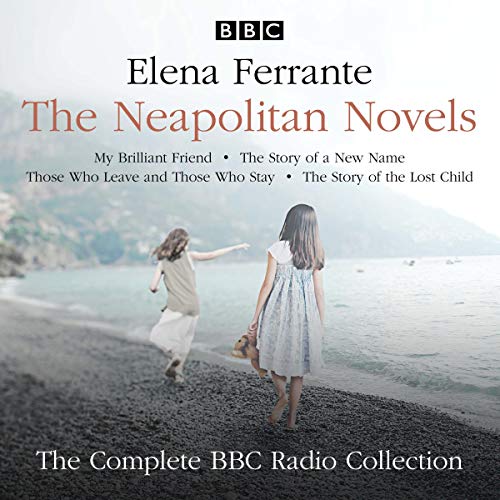 From one of Italy's most acclaimed authors, The Neapolitan Novels is an exploration of the friendship between Lila and Lena, two bright young girls who grew up in the tough, rough streets of postwar Naples. This is no normal friendship; it's a friendship that loves, hurts, supports and destroys - and yet it is one that lasts a lifetime. These four full-cast BBC adaptations bring the streets of Naples vividly to life.

The first novel , My Brilliant Friend, begins in the 1950s in a poor but vibrant neighbourhood on the outskirts of Naples. Growing up on these streets two girls, Lena and Lila, learn to rely on each other ahead of anyone - or anything.

The Story of a New Name sees the two girls striving to make a better life for themselves. They work hard at school, but Lila is stopped in her tracks when forced to give up her education to work for the family shoemaking business. It's not long before their worlds are pushed apart.

In the third book, Those Who Leave and Those Who Stay, Lena escapes to Milan but struggles to find the courage to live, parent and write again after her marriage to her increasingly dismissive husband. Lila, meanwhile, also struggles to rise above her social conditions and desperately tries to find a way to better herself in whatever way she can.

In the final part of their story, The Story of the Lost Child, Lena returns to Naples with her two children to find Lila has also managed to turn her life around, despite remaining in the claws of violent and Mafia-run Naples.

Through broken marriages, violent pasts and the yearning for something more, the two women always turn to each other as their friendship - and the tensions between them - grow ever deeper.

Adapted from the books by Elena Ferrante, translated by Ann Goldstein
Dramatised by Timberlake Wertenbaker
Directed by Celia de Wolff
A Pier production for BBC Radio 4

What listeners say about The Neapolitan Novels: My Brilliant Friend, The Story of a New Name, Those Who Leave and Those Who Stay & The Story of the Lost Child

Worth persevering with this.

Hard to get going but really well worth the effort. An excellent production all round.

Working class italian replaced with northern accents! SO bad!!! (Im a working class northerner) Its painful to listen to..

Great story but not for me

Hard work trying to picture this Italian story when the parts are read in Northern England accents, nowt against Northern as Im northern myself but all these beautiful characters sounding like Evelyn from Coronation St is so off putting.

I simply couldn’t get past the first section of Chapter 1 as I took an instant dislike to the narrator’s style with the children’s voices. Totally a personal opinion and I will try reading the book.

why could the readers not have had italians accents .The passion and atmosphere was lost.Naples is a fabulous city
but the production gave none of that heat and fury I didnt like this dramatisation

Absolutely love these books. Adaptation is excellent and it leaves you wanting more. I loved the translation of Italian Naples characters into an equivalent English dialect.

Brilliant! Loved every minute of this. A gripping adaptation, really well done. Would definitely recommend this. Probably cuts out a lot of the books, but as an audio adaptation it's hugely engrossing.

After missing the live performance I wanted to get stuck in ...

After sadly missing out on the theatre performance earlier this year I couldn’t wait to listen to My Brilliant Friend - in fact this title was one of the reasons I went for this trial - admittedly initially I was a little confused with character’s ie who was who - as the narrative is fasted paced and clearer when you are still and aren’t distracted in a shopping aisle! By the third book I was utterly absorbed and will go through all of this authors books.

An adaptation - not the actual books

I thought this would be someone reading the books but it turned out to be a staged adaptation by the BBC - more like a radio play. The performances were fine but the result was awful - lots of repetitive arguing, bitchy insults and verbal catfights, and poor narrative structure. It was closer to a bad soap opera than literature. I was so fed up I almost quit near the end but suffered through the last 25 minutes for an ending that trailed off into nothingness.

Barely understandable, a beautiful story butchered by an accent that could never understand a family from Napoli!

We bought this to listen to on a long car ride. Neither my husband nor I could understand the echoing heavily-accented dialogue. I am big audio-book fan, but this dramatization was poor.

Elena Ferrante is one of my favorite authors.
This audio book would have been much improved if narrators voices were not in a
lower class English accent. It really spoiled what could have been so rich and lovely.