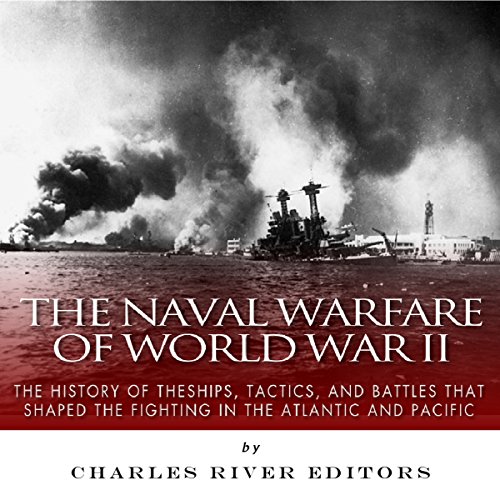 The History of the Ships, Tactics, and Battles That Shaped the Fighting in the Atlantic and Pacific
By: Charles River Editors
Narrated by: Doug Lee
Length: 3 hrs and 4 mins
Categories: History, 20th Century
3.5 out of 5 stars 3.5 (4 ratings)

Naval combat underwent a significant metamorphosis during World War II. Nazi Germany and Imperial Japan launched some of the most powerful battleships ever to sail the world's oceans, yet the conflict witnessed the emergence and triumph of the aircraft carrier as the 20th century's true monarch of the seas. Submarine warfare expanded and developed, while aircraft technology and doctrine experienced several revolutionary changes due to the unforgiving demands of the new combat environment.

Popular accounts of World War II frequently focus on the dominance of German panzers over the more lightly armored, lightly armed tanks of the Soviets, British, and Americans or the superb fighting skills of the Waffen SS and ordinary Wehrmacht soldiers. Germany's land forces enjoyed an undoubted advantage over their enemies thanks to excellent vehicle technology while German soldiers slaughtered vast numbers of Soviet conscripts and proved formidable opponents even to their better-trained English and American counterparts.

However, the Axis failed to secure either the seas or the skies, and their defeat in these theaters ultimately led to their doom. Many highly advanced aircraft designs languished on the drawing boards of Junkers and Messerschmitt engineers, left undeveloped due to high-command disinterest or simple lack of resources. The most advanced fighters developed by Nazi Germany and Imperial Japan were equaled or outmatched by such aircraft as the US F6F Hellcat (which achieved kill ratios of between 13 to 1 and 19 to 1 against Japanese "Zero" fighters) or P-51 Mustang.

American biased, Save your credit and money.

Extremely American and Pacific biased. The Author does not know of British or commonwealth forces, however refers to the English a lot.
Hardly any mention of submarine warfare. Negligible mention naval forces from occupied territories.
It does give a good overview of guadalcanal and midway. Goes into some depth with naval air power.
Overall would have been better titled as "American air power in the Pacific".
The use of human shields on the Japanese home islands hasn't got much to do with Naval warfare has it?

The narration was jumpy at times, don't know if this was the recording or the way the narrator spoke. H9e struggled to pronounce certain words especially German or European language words.

Save your credit or money for something better.

The book felt sloppy. Some events were repeated almost word for word in the book.

It is ok. I only wish it is more in detail

I was looking for more in this book. The overall quality is great but for most of the battles the book just glanced through it. It does put some emphasis on the pre-war naval doctrine an the subsequent pearl harbor attack which is quite informative, but other than that? Even the midway chapter, which I think the author focused a lot on, is a bit lacking. So if you want a very very broad view of the pacific war then I say go for this book, but if you want more details... I think I would try something else.

Informative on many new points especially regarding the barbarity of Japanese soldiers against some of the civilians.