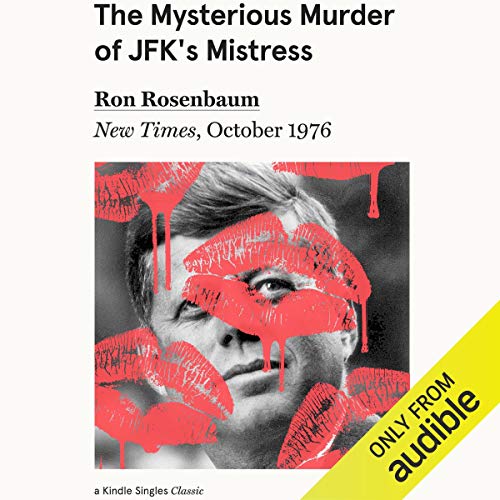 The Mysterious Murder of JFK's Mistress

The Mysterious Murder of JFK's Mistress

On the Saturday following Mary Meyer's murder, five people gathered at her Georgetown home and tore it apart searching for the secret diary. Sometime before she died, Mary had entrusted to her friends James and Ann Truitt the fact of her affair with JFK and the existence of a diary recounting some of her evenings with the president.

In "The Mysterious Murder of JFK's Mistress", Ron Rosenbaum investigates the murder of Mary Pinochet Meyer, whose affair with President John F. Kennedy became tabloid fodder, and who was found shot to death on October 12, 1964. Immediately after her death, one of the CIA's top priorities was finding the diary in which Meyer chronicled her relationship with the late president and the secrets they shared.

"The Mysterious Murder of JFK's Mistress" was originally published in New Times, October 1976, and co-authored with Philip Nobile.

skip this one, read the real story in "mary's mosaic"

if youre interested in a true exploration of mary meyers relationship with jfk, and an incredible piece of non-fiction writing to boot, read "mary's mosaic" immediately. this piece, by comparison, is superficial--perhaps even written with an agenda. get the real deal and the final word on the topic of mary meyer and jfk. get mary's mosaic. its incredible.