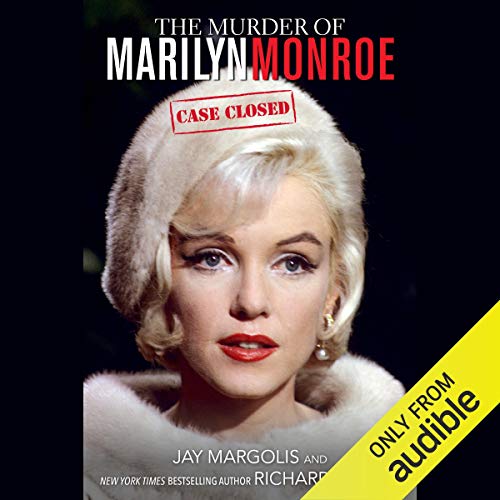 The Murder of Marilyn Monroe

Marilyn Monroe died under suspicious circumstances on the night of August 4, 1962. In The Murder of Marilyn Monroe: Case Closed, renowned MM expert Jay Margolis and New York Times best-selling author Richard Buskin finally lay to rest more than 50 years of wild speculation and misguided assertions by actually naming the screen goddess's killer. At the same time, they use the testimony of eyewitnesses to describe exactly what took place inside her house on Fifth Helena Drive in Los Angeles's Brentwood neighborhood.

Implicating Bobby Kennedy in the commission of Monroe's murder, this is the first book to name the LAPD officers who accompanied the attorney general to her home, provide details about how the Kennedys used bribes to silence one of the ambulance drivers, and specify how the subsequent cover-up was aided by a noted pathologist's outrageous lies. This blockbuster volume blows the lid off the world's most notorious and talked-about celebrity death, and in the process also exposes the third gunman in the pantry who delivered the fatal bullet to the back of RFK's head - and the third gunman's female accomplice who, until now, has only been known to the LAPD and the FBI as "the girl in the polka-dot dress".

What listeners say about The Murder of Marilyn Monroe

Power breeds corruption and this book proves that Marilyn was a mere plaything of the rich & politically powerful. When she became a nuisance, they simply arranged for her demise to suit their future lives. However, it seems that fate had justice in mind for both her political lovers as they, too, became inconvenient to the wider establishment and were 'got rid' just like the highly naive Marilyn. A complex, detailed but extremely engaging read.

Make up your own mind

So much information here which appears credible. If the genuine autopsy findings quoted are accurate.... empty stomach.... discoloured colon.......then the killer drug was not swallowed by Marilyn but administered by a third party with terminal results. This would throw total shade over all the theories of accidental overdose or suicide. Such a sad life and equally sad demise. It's well written and well narrated. You can come to your own conclusion as to what really bought the troubled life of Marilyn Monroe to a close.

Very detailed and in depth account of Marilyn's death.
I feel that I now know what actually happened

Very insightful and thorough. Makes you realise the elite wont let anyone or thing get in there way.

Wow! This was a riveting read! Thus poor woman was exploited to the very end and then assaulted and murdered by the very people she trusted.
Thus us expertly , meticulously researched and the author, I believe has nailed it. One of the best reads I have had in a long time .
I wonder why the rights to thus haven’t been snapped up and produced, I wish the tapes if the final 11 hours would surface. With today’s Tech. The voices would be verified beyond all doubt. But thus, you won’t be disappointed!

I was really excited about listening to this book but very disappointed when doing so. The narrator is horrible in my opinion, I would suggest reading it instead.

The Whole Truth and Nothing But The Truth

This book was very detailed and gave insight into the world of the RF Kennedy assassination.

To be honest, I probably wouldn't have purchased this title, but as a selection of the Plus catalog, and looking for something to fill time before the next book, I gave it a shot. Any book with "Case Closed" is always a red flag though. The author presents a lot of intriguing information (oddly at times, contrary to his own position, which helps retrieve a bit of credibility in the project). But the overriding impression of the book is that several elements are repeated over and over, verbatim at times. Some are clearly editing gaffes. Some are seemingly from an author who has written chapters piecemeal, wanting included important elements, and then using the same passages again in later sections of the book, either forgetting on not caring about the repetition. Some good parts, nothing terribly special, but having come at no extra charge, I can't complain.

The author repeated the same-thing every chapter.... NO CASE WAS CLOSED! I Couldn’t get past the 4th chapter.

This book brought to light a lot I never knew about the time like! Thank you

Most Accurate book EVER on Marilyn Monroe's Murder

This is the most thoroughly researched, detailed, well-sourced and accurate book I have ever read about the murder of Marilyn Monroe. I apologize for the length of my review, but after reading this book I feel compelled to state what was told to me in my childhood by people who actually knew Marilyn.. I am now 70 but grew up 20 minutes from Brentwood in the 60s. My parents were not involved with Hollywood/movie business whatsoever, but we had a neighbor who was, and also a family friend, who both knew Marilyn personally. One of our neighbors in South Pasadena was a former vaudevillian and actor (stage name, Buster Shaver). There's an old clip of his Vaudeville act on YouTube. He was a very accomplished dancer. Buster knew Marilyn Monroe personally and had told us how sweet, vulnerable and misunderstood she was. He said she was an absolutely brilliant actress and never got the respect or recognition she deserved. He said the studios treated her very badly. Very early on the morning of August 5, 1962, I remember someone banging on our back door waking us all up. We ran towards the kitchen door to see what all the noise was about. It was Mr. Shaver. He was very, very distraught and was shaking a newspaper in the air. My father opened the door and let him in. Tears were running down Mr. Shaver's cheeks. He showed us the headlines and yelled "Marilyn is DEAD! They killed her! Those goddamn Kennedys killed her. She knew too much!" Those were his EXACT words and I will never, ever forget how utterly distraught he was. We had been neighbors for many years and I never saw him like that before. You see, the MM/Kennedy affairS were well known within Hollywood circles even then, just not within the general public - not UNTIL Marilyn so sultrily sang "Happy Birthday Mr. President." THAT let the cat out of the bag and let the whole world IN on what was going on! THAT performance and her later threat to go to the press and "blow the lid off the whole goddamn thing" signed Marilyn's death warrant.

One of our family friends, the mother of one of my father's old WW2 Navy buddies, had first-hand knowledge of MM's affair with RFK. She was an artist and neighbor of Monroe's in Brentwood (we always refer to it as "Westwood" back then). This 65-ish artist was a very nice lady but a bit eccentric. She lived with two toilet-trained Siamese cats, and two large cockatoos she had taught to swear at men and wolf whistle at women when they entered her home! Her home was Spanish style with white stucco and a red tile roof (very much like Marilyn's). Her garage had been converted into her artist's studio and she could see/hear the comings and goings at Marilyn's house while she painted. We always held our July 4th picnics at this lady's house because her yard was so beautiful with a sweeping emerald green lawn and lemon and apricot trees. From her elevated back porch, if you looked left and down, you could see Marilyn's pool shimmering through the trees that bordered their properties. She told my parents that she saw RFK and Peter Lawford coming in and out of Marilyn's house TWICE that afternoon, and she heard cars coming and going at Marilyn's throughout the night. She and other neighbors heard RFK and MM shouting at each other on August 4th. She's not named in this book but I remember my mother telling me that our friend had been playing cards that afternoon with neighbors when they heard Marilyn and RFK fighting with each other. EVERYTHING my mother related to me told to her by her friend about that afternoon and evening is confirmed in Mr. Margolis' book. That's why I know that this IS what happened to Marilyn - it was no "accidental overdose" or "probable suicide." Marilyn Monroe was murdered, and if you want to know what REALLY happened to Marilyn Monroe, and WHO her killers were, READ THIS BOOK.

Lastly, Mr. Margolis' writing is superb and the narrator is one of the best I have ever heard on any Audible book.

I definitely learned a lot but the monotone voice of the narrator was difficult. I finally had to opt out on the last ninety minutes when they randomly shift over to the death of Robert Kennedy and start to go into deep, boring, monotone details of his case file!

Too Long and Too Much Repeating

They could have told the whole story in an hour or less. Instead they keep repeating things over and over again, changing stories,talking about Robert Kennedy's assassination when this is supposed to be about Marilyn's murder. Just a lot of repeating too much and changing the story a few times so you don't know what to believe anymore. Not worth wasting seven hours listening to.

The story was well done yet repetitive. The narrator has a good voice but a speech impediment. it became distracting throughout the book. Especially with the letter "S"