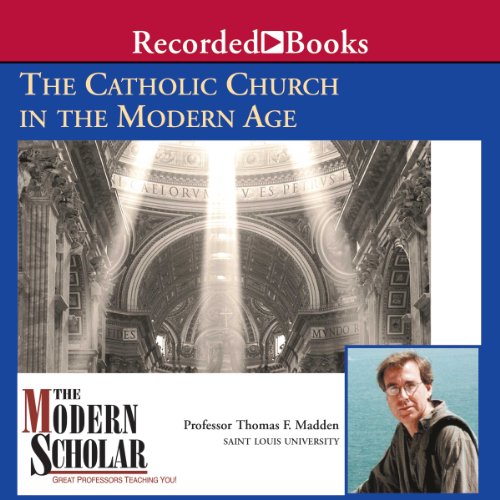 The Modern Scholar: The Catholic Church in the Modern Age

As the world entered the modern age, the Catholic Church faced new challenges to its authority, both from without and within. As one of the planet's oldest institutions, the Church had already survived 16 centuries, but as winds of change altered the global landscape, the Church's very existence would be called into question.

Professor Thomas F. Madden leads these compelling lectures, focusing on a Church both adapting to a world in flux and striving to exert its influence and power. Throughout modernity, the Church responded to - and weathered - a host of major world events: the Enlightenment, the French Revolution, colonization of the New World, and of course the World Wars that in large part defined the 20th century.

As the face of the Church, the popes affected Catholicism in ways that can only be truly understood from a careful examination of the past. And so the lives of the popes, along with major Church proceedings, wars, and other significant world events, are brought to bear in a comprehensive look at the Church in the modern age.

What listeners say about The Modern Scholar: The Catholic Church in the Modern Age

These lectures are long enough to give a good overview and short enough that the non-specialist does not flag when listening. It's important that Madden provides context and historical background at times for listeners not very familiar with Catholicism or Christianity. I was struck how little I knew about the modern history of the papacy, Italy, the unification of Italy, etc. Bravo!

Along with a fascinating history of the modern church, this was also an insightful overview of the events that shaped recent European history as seen from the perspective of the church leaders.

Since it is a lecture format, and is delivered by Prof. Madden, is is flawless in performance. Very engaging and easy to listen to.

By the end of lecture, the professor made a slip of tongue and said "first" instead of "second" but otherwise, a good lecture on the modern catholic church. It's also very informative if you are interested in Victorian history in Europe. I certain find the Italian history a bonus.

Madden's voice is monotonious, but he does hold you with the history.
This audio should be approached more as the lectures they are and not as a continuous stream such as a novel. This allows you to overcome the voice deficit and concentrate on the material presented.