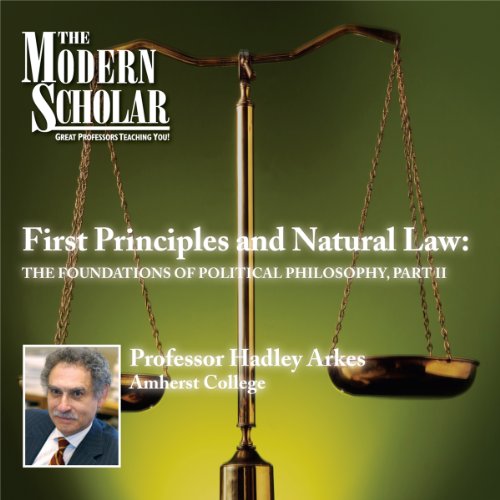 In Part II of First Principles and Natural Law, Professor Hadley Arkes delves further into the classic connection between morality and law. Indeed, this link between the basis of law and the principles that form the groundwork of moral judgment is very much at play in today’s world, as evidenced in everything from Supreme Court decisions to national policy. Drawing upon the works of such influential philosophers as Immanuel Kant, David Hume, and Thomas Reid, Professor Arkes examines such relevant topics as conscientious objection, the justifications for war and interventions abroad, privacy claims, and abortion.

If you could sum up The Modern Scholar: First Principles & Natural Law: The Foundations of Political Philosophy, Part II in three words, what would they be?

What was one of the most memorable moments of The Modern Scholar: First Principles & Natural Law: The Foundations of Political Philosophy, Part II?

The concept of functioning from the perspective of the spirit of truth for the common good and communicating on the level where one is understood rather than truth as something abstract. One must communicate what the other person can understand rather than to just devulge information. It is the principle that is the focus and not how one feels about something. One must reach a place of objectivity rather than functioning on a very personal and subjective level to be contributing to the good of society and actually to one's own good.

This was not a history or a story narrative but a philsophical explanation of moral law and the matter of the principles of natural law.

Coming to grips with the truth objectively.

This was the most interesting and logical approach to the matter of ethics and morals I have ever heard. I absolutely loved it. It helped me to really uderstand the matter of communicating on the level of what others understand rather than being idealistic. I listened to it several times.

This book made me reflect on my own definitions of right and wrong within a moral framing, rather than what it is that most people seem to want. It is no less necessary in this time (2019), then it was when it was first produced.

Key to understanding the American Republic

This author is an expert in his field. And he is able to explain the moral premises of the American Republic with clarity, simplicity, and humor.

With fair warning, once you listen, you may never think of self government and the US Constitution the same way again!

Hadley Arkes is an excellent instructor!

Clear, concise explanations about the basic principles of political philosophy. Listen to the first part of this series first as it builds on previously learned material. Excellent buy. Very enlightening.

"Morals" from an extreme reactionary

His previous course was reasonably good. Only one out of eight lectures was political - he claimed that affirmative action was fully equivalent to segregation. This course is different. Fully one quarter of the course is spent on propagandizing the professor's radical position on abortion. Another quarter is spent attacking the idea that there is right to privacy, and defending laws banning contraception. 1/8 is spent defending the Vietnam War and claiming that South Vietnam was a democracy (an absurdity). About 1/4 of the course is non-political and non-religious. Frankly, I felt cheated. I did not buy this course to have Arkes force his extreme political-religious views on me. His own students at Amherst have also noticed what his main concern in class is. A representative example from Rate My Professor: "Very redundant and obsessed with imparting his own political views on his students."

Dr. Arkes is a convert to Catholicism, though he won't tell you that, preferring instead to pose as an independent, objective observer. Just by coincidence, all his views just happen to coincide with what the Catholic Church teaches. Same for his position on abortion, which he hides: he refers to pro-lifers as "they", even as he takes the Todd Akin position on abortion. It turns out that he has made the exact same argument in the past. I quote from his book: "[T]he fear induced by rape may interrupt the normal operation in hormones in the body of the woman, which in turn may prevent ovulation and conception." Except that unlike Akin, he won't even allow an exception for the life of the mother. He asserts his belief that it is not necessary, but actual experts disagree. He has even justified the murder of abortion doctors in the past.

Having certain beliefs would not be a problem if he were objective (like Peter Kreeft, another Catholic and conservative), but he isn't. He propagandizes his own religious beliefs, and dismisses out of hand any position that is in disagreement with his. He doesn't bother to refute them, he just puts a negative label on them, his favorite being "strange", and proceeds to assert his own (religious) belief.

More oddities: He claims that people are marrying dogs, but then contradicts himself by stating that even in the future "we will still not be signing contracts with dogs and horses". He asserts that a progressive income tax is fully equivalent to having a higher tax on Asians. He also believes that the president can overturn Supreme Court decisions that he doesn't like.

This is not philosophy, it's thinly disguised political and religious propaganda.

the initial aprt of the book obviously reflected his personal bias was presented in strident speech. thereafter, rather humdrum performance which presented no new material to me. I am quite well read in things philosophical. I was expecting additional insight. After his rant, his analysis was merely a rehearsal of discussions of various positions without providing additional insight.