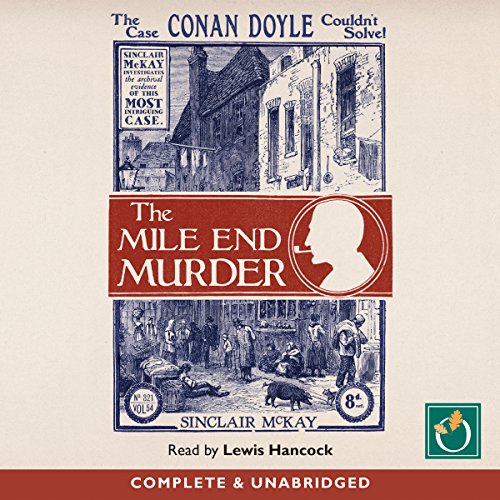 By: Sinclair McKay
Narrated by: Lewis Hancock
Try for £0.00

On 17 August 1860, wealthy widow Mary Emsley was found dead at home, killed by a blow to the head. What followed was a murder case that gripped the nation.There was an abundance of suspects, from disgruntled stepchildren and a spurned admirer to a trusted employee, former police officer and spy.

A sensational trial culminated with a public execution, but years later the case caught Arthur Conan Doyle’s attention. Convinced that an innocent man had been convicted and executed, he could never find the real murderer, but now, best-selling author Sinclair McKay has solved the case.

A solid true crime book which has obviously been very thoroughly researched for such an obscure old case. Goes off on a couple of slightly dragging tangents towards the middle, regarding Victorian life/history etc however overall the book is very enjoyable and definitely worth a listen if you’re interested in Jack the Ripper-esque atmospheric mysteries. However, if you’re here for the Arthur Conan-Doyle tagline you will be left pretty disappointed. Very little is discussed regarding the author and his interest/opinions on the case which (even though I’m not especially a fan) was rather a shame and felt a bit misleading.

When wealthy and eccentric widow Mary Emsley is found dead at her home on 17th August 1860, the resulting murder inquiry grips the nation. Faced with several suspects, the police home in on two individuals, finally narrowing it down to one man – James Mullins. Convicted and hanged for the killing, the Mullins case left the public baying for justice, convinced the police had the wrong man. But if Mullins didn’t kill Mrs Emsley, who did?

Arthur Conan Doyle wrote about this case many years later but even he seemed unable to come up with a solution to the mystery. Charting the events leading to the murder and its aftermath, Sinclair McKay creates an absorbing and highly-detailed account, exploring every possible angle. Though occasionally lapsing into social history (which nevertheless helps create a complete picture of the times), the author also provides a solution to the murder.

Narrated by Lewis Hancock, this is an interesting and thought-provoking account of a murder that remains unsolved.

This book sounded intriguing from the description, but unfortunately turned out to be very boring. The author gets caught up in the minutiae of the case and fails to really bring it to life, compared to other true life Victorian crime books I have read.

The narration was good though, to be fair.

Poverty and murder in the East End

Not really a murder mystery more an exploration of social conditions in the East End. Very entertaining nonetheless. The judicial system is examined alongside the newly created Police Force. The Conan Doyle connection is tangential. The narration is lively