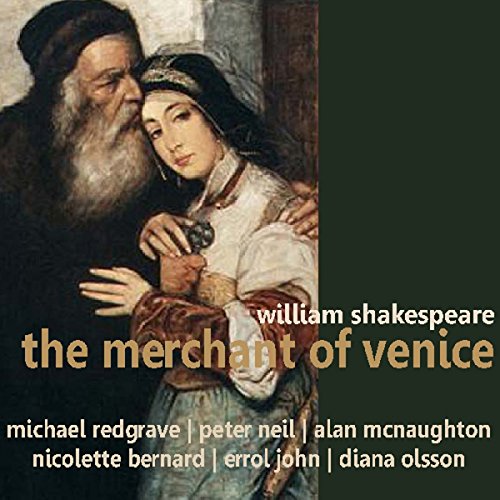 By: William Shakespeare
Narrated by: Michael Redgrave,Peter Neil
Try for £0.00

What listeners say about The Merchant of Venice

I bought this thinking that it was an UNabridged version of Shakespeare's play. When I played it, I found that IT IS AN ABRIDGED version!

DO NOT BUY IF YOU WANT AN UNABRIDGED VERSION.

It skips lines often. If you are reading along, it leaves you lost and searching for the line. Don't buy

I'm primarily a "business history guy," and not into fiction much. But I'm also an Anglophile, raised on Shakespeare, and this play is very revealing of much business/cultural history. Modern ears, I think, will likely deplore the injustices done to the Jewish merchant Shylock, which might not have been Shakespeare's (or his audience's) views at all. This was billed as a "comedy," right? As in, having a "happy" ending? But I love the way the pretzel logic leaves everyone, even the most virtuous, tinged with a bit of larceny and trickery. The hypocrisy of the supposedly virtuous Establishment gentiles was well on display here (perhaps unintentionally?). The performance I thought delightful all around. I can only wish audible would produce the earlier Christopher Marlowe play "The Jew of Malta," and maybe the nonfiction book "Shylock's Children: Economics and Jewish Identity in Modern Europe" by Derek J. Penslar. But meanwhile, Ferguson's "The Ascent of Money" is available, which sheds some limited light on the topic.

the relationship between the persons

What made the experience of listening to The Merchant of Venice the most enjoyable?

the relationship of the jew and the christian and generally how it unfolded in terms of trust and deceit. the book was used for studies

This is a recording from a vinyl LP

Nice performance but this is a recording from an LP. I can hear the needle hitting the grooves.

This version of the play is wonderful and moving. However, at the begining, it took me time to get used to the pace of the acting. It is a bit too quick. But don't worry, you get used to it after a fiew minutes.

Anyone who isn't trying to read along with the text. So much of it was skipped over or missing that i found it impossible to enjoy.