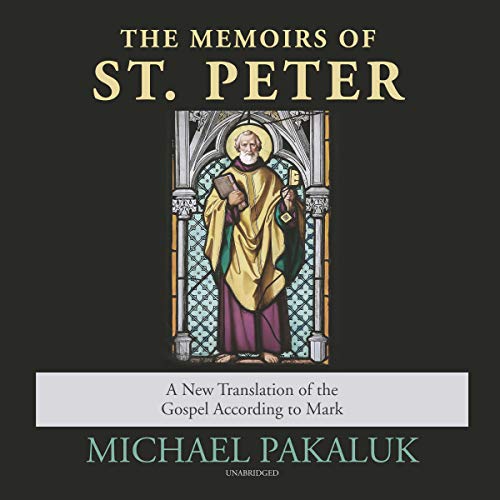 The Memoirs of St. Peter

By: Michael Pakaluk
Narrated by: Jim Denison
Try for £0.00

The Gospel as you have never heard it before...

At a distance of 20 centuries, the figure of Jesus of Nazareth can seem impossibly obscure - indeed, some skeptics even question whether he existed. And yet we have an eyewitness account of his life, death, and resurrection from one of his closest companions, the sherman Simon Bar-Jonah, better known as the Apostle Peter.

Writers from the earliest days of the church tell us that Peter's disciple Mark wrote down the apostle's account of the life of Jesus as he told it to the first Christians in Rome. The vivid, detailed, unadorned prose of the Gospel of Mark conveys the unmistakable immediacy of a firsthand account.

For most, however, this immediacy is hidden behind a veil of Greek, the language of the New Testament writers. Four centuries of English translations have achieved nobility of cadence or, more recently, idiomatic accessibility, but the voice of Peter himself has never fully emerged. Until now.

In this strikingly original translation, attentive to Peter's concern to show what it was like to be there, Michael Pakaluk captures the tone and texture of the sherman's evocative account, leading the listener to a bracing new encounter with Jesus.

The accompanying verse-by-verse commentary - less theological than historical - will equip you to experience Mark's Gospel as the narrative of an eyewitness, drawing you into its scenes, where you will come to know Jesus of Nazareth with new intimacy.

A stunning work of scholarship readily accessible to the layman, The Memoirs of St. Peter belongs in the listening library of every serious Christian.

What listeners say about The Memoirs of St. Peter

This excellent audible provokes further reflection and opens up a new way of looking at other Gospels. I ordered the hardback book after listening on audio as I would like to read this not only listen to it. Thoroughly enjoyable.

Please buy this book! It is exceptional start to finish! Pakaluk succinctly illuminates the gospel of Mark in remarkable fashion.

An excellent translation and devotional commentary

This translation and commentary on the Gospel of Mark are written in an easily-accessible style that both illuminates subtleties in a familiar text and introduces insights that even a regular scripture reader will appreciate. The author/translator explains his occasional idiosyncratic translation choices in a way that further uncovers layers of meaning in the text, and draws upon the insights of Church Fathers and Doctors throughout history to enhance his own reflections on the Gospel text. This is a translation & commentary that will be very fruitful for adult faith formation and scripture study classes to read together!

I love the format. Present the text and the comment. It really is an insightful analysis and pleasantly presents the analysis of Marks gospel as it relates to the first hand experience of Christ through St Peter. This will help me approach other gospels and help deepen my belief in the divine inspiration found in the Bible. Thank you so much.

As a Christain, I thoroughly enjoyed this book, as would anyone, (Christain or not) , interested in Mark's book. I would listen to a chapter a day with my Bible at hand to make notes. The commentary was superb, being a fresh insight and the thesis was welcomed. Not being revisionist or skeptical, but rather a loving, respectful Christian view of a great book.

They make a pretty good case that Mark is detailing the firsthand experience of St. Peter and not so much his own. They seem to fade away from reinforcing this supposition as the chapters are read and interpreted.

The narration would be the only place I would seek improvement; I enjoy more range in tonality. The narrator sounds like the "This is audible" In tro??? The content of the interpretation more than makes up for it.

I would like to see more Biblical interpretations detailed in the same format from this author.

Each chapter begins with a reading of the scripture as it was written. Then what follows is commentary in great detail, verse by verse in many cases and even by word in a verse! It is so thorough and enlightening, one can surely be persuaded by the author that the majority of the gospel is a direct scribe of St Peter and his preachings. So much is revealed too in the fulfillment of prophecy of the Old Testament, the Holy Trinity, the revelation of Jesus as Messiah and the reflective understanding of teachings that Peter would have come to after the resurrection as a firsthand account. It’s a fascinating and easily listened to book, although best taken a full chapter together. It’s hard to come back in the middle of a chapter. I had to repeat from the beginning of a chapter once or twice in order to keep the continuity of the message.

I highly recommend to anyone who is delving to understand more about St Peter and his devotion to Jesus and His Church.

if your a christian and want to get more of an insight on the life of our Lord and Savior Jesus Christ as witnessed firsthand through the Eye's and ear's of St. Peter The Apostle, Then this book is for You.