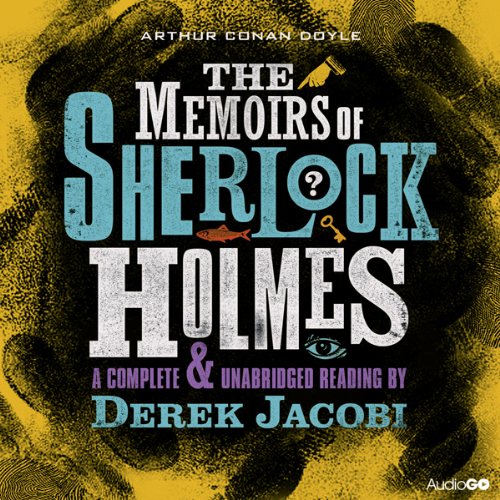 The Memoirs of Sherlock Holmes

By: Arthur Conan Doyle
Narrated by: Derek Jacobi
Try for £0.00

With his devoted Dr Watson, Holmes emerges from his smoke-filled rooms in Baker Street to grapple with the forces of treachery, intrigue and evil, including the diabolical Professor Moriarty.
Public Domain (P)2008 BBC Audiobooks Ltd

What listeners say about The Memoirs of Sherlock Holmes

It's obvious after he's explained it.

More great stories from Conan Doyle. This volume contains a series of twelve short stories which are excellently read by Derek Jacobi. It contains the second collection of stories (collated over period 1892-1893), after 'The Adventures of Sherlock Holmes (1891-1892 collection). I stupidly read the third collection ('The Return Of...') before 'The Memoirs..'. At least now I know where he is returning from! Where he goes is covered in the last short story of this book - 'The Adventure of the Final Problem'. Holmes came back due to popular pressure on the author. Highly recommended book.

This was my second listen to these most absorbing stories. It kept me listening for many hours, unable to tear myself away. Beautifully narrated once again by Derek Jacobi.

Derek Jacobi narrating and performing Sherlock Holmes is a match made in heaven. And I have so enjoyed it. Previously I had A Study in Scarlet and The Adventures of Sherlock Holmes read by Derek Jacobi and are equally just as good. This particular group of stories I was less familiar with than in the Adventures. The last story at the Reichenbach Falls is well known and yet still it tugs at the heart. "Don't leave him Watson!" this time.

If you could sum up The Memoirs of Sherlock Holmes in three words, what would they be?

No, because it's good to savour the stories.

This was intended to be the final Sherlock Holmes collection, though this was not to be. There are some excellent stories in this collection: Silver Blaze, the Musgrave Ritual and the Greek Interpreter to name a few. Yet it is the final story, the Final Problem, that everyone knows. It introduces Professor Moriarty, providing Holmes with an adversary who is his equal, and possibly his end...

Would you consider the audio edition of The Memoirs of Sherlock Holmes to be better than the print version?

Derek Jacobi is a legend and his uncanny ability to bring to life each and every character is wonderful. His voice is opulent in tone and his acting prowess ensures that his narration is world class. I have listened over and over again. I love it.

What other book might you compare The Memoirs of Sherlock Holmes to, and why?

All of the Sherlock Holmes stories undertaken by Derek Jacobi

Wonderful stories as any Holmes fan knows, excellently narrated by Derek Jacobi who puts on different (but not stupid) voices for each character, top marks.

You know Sherlock Holmes. You've seen adaptations on TV, you know his stories. But, listening/reading the books is just wonderful. By reading, you gain a deeper understanding of Holmes, of Watson, of Victorian England and Derek Jacobi is an amazing narrator. He is perfect for the job. So even though you may be familiar with the stories, have a listen and instead of being preoccupied with 'who done it' (cos you probably know already), enjoy the journey and allow Holmes to lead you there in his own unique way.

I often find myself being hyper critical of any story which paints a character as a genius and then, in order to progress the plot, has them make some sort of obvious mistake. So it was with some trepidation that I began the Sherlock Holmes stories. I have now completed them all, purchasing this one mainly for the Reichenbach falls story.
The plots are beautifully woven, the characters are very interesting and the so the stories make great reading whether you are listening for pleasure or trying to beat Holmes to the solution.
I will admit that Derek Jacobi is not my normal Holmes reader and I do prefer Charlton Griffin, but that's not to say this isn't a solid performance.

The older British public seem to prefer their “classics” read in deep, resonant, “classic BBC” voices, out of a belief that it lends gravity to our profound literary heritage. Factors influencing that preference would be the regular diet of recordings of Shakespeare plays received in school, and the popular costume dramas seen at the cinema, on TV, and heard on the radio. Ironically, we also have a love of authenticity, but only when it suits us ! From an audio book perspective, we should want the narrative of Dracula read with an Irish accent, and the Count’s dialogue a la Bela Lugosi : “Leeson to zem, ze cheeldren of ze nat. What mewsic zay mek !” But contrary as ever, most of us want the lot Christopher Lee style.

So how do we want our Sherlock read, then ? In the rich Edinburgh accent of Conan Doyle ? In the very English tones of Basil Rathbone or Jeremy Brett ? I have to admit a personal fondness for the voices of Basil Rathbone, and the bumbling Watson of Nigel Stock. But as the vast majority of the narrative is from the notebooks of Doctor Watson, a comic, Stock-like voice might begin to try one’s patience after a while. Would an American accent seem inappropriate ? Of course it would, just as you would not expect Stephen Fry to attempt re-makes of John Wayne movies ! ( That would indeed be the day ! ! )

If money is no object, and you love Sherlock, get all three ! Realistically, prioritising your requirements is the best way forward : cost, completeness, or sound.

Just dont bother, the plodding and monotinous narration makes this a truly arduous listening experience. Being a Holmes fan I was really looking foward to this, very ,very dissapointed.

Why wouldn't they break this series into tracks as opposed to lumping it all into one giant file??? They have done this with the past stories but with this one its just one, 9 hour long track! BOOOOOOO with this absurd exception, its an awesome recording.

A Must for the Holmes Fan

Derek Jacobi is to the audio Holmes what Jeremy Brett was to the video - absolute perfection! Whether you listen to one or many, these stories are a wonderful respite from the modern world. Holmes is enigmatic, Watson is lovable, and the plots - though indisputably dated - continue to be intriguing and satisfying. If you know the tales well, vaguely, or not at all, "The Memoires" is one of the best collections to choose and this is the very best narrator. It's elementary!

Great stories are even greater when an outstanding actor like Derek Jacobi reads them... he interprets the voices and subtext in such a warm an engaging way you can listen to these mysteries over and over again.

Derek Jacobi's performance is excellent as usual. His marvelous reading of these classics has inspired me to enjoy the entire Holmes canon.

this was a very good introduction to audible books for me...I enjoyed the quality, and ease of listening immensely...thank you audible!

I have other audiobooks narrated by Mr. Jacobi and have been enthralled. However, in this particular case his voice sounds overworked, strained and hoarse . Therefore it is difficult to listen to the chapters.