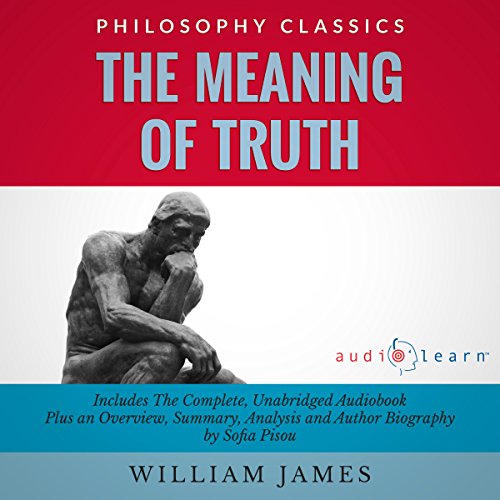 The Meaning of Truth

The Meaning of Truth is a prime example of the philosophical movement of pragmatism, which was developed in the United States in the 19th century. Written in 1907 by one of the most ardent proponents of pragmatism, William James, this collection of 15 essays answers the critiques that pragmatist tradition had received. The Meaning of Truth constitutes a sequel to the previous book, James produced earlier in 1907, named Pragmatism which was based on the lectures given in Boston and at Columbia. An ingenious approach to the movement which James represents, a bright clarification of all the misunderstandings and an acute review on the lectures delivered by anti-pragmatists who doubted and speculated falsely over the meaning of truth. Includes: A brief background of the author and the work Overview, synopsis, and analysis Historical context, criticisms, and social impact Chapter-by-chapter summary The full narration of the text This audiobook is suitable for students and anyone interested in contemporary philosophy.

What listeners say about The Meaning of Truth

James is Superb, brilliant. The reader, excellent. so WTF explains NO correlation between Jm's book chapters, Audible chapters, & clip notes' access/retrieval? it's complete incoherence! What a mess! Does no one examine the product's functionality before putting it up for sale? Exasperating!