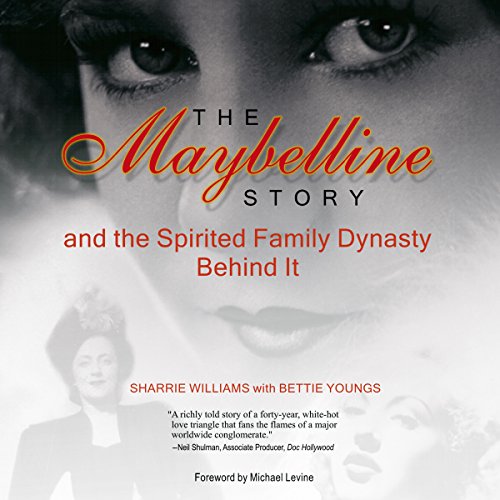 The Maybelline Story and the Spirited Family Dynasty Behind It

The Maybelline Story and the Spirited Family Dynasty Behind It

In 1915, when a kitchen stove fire singed his sister Mabel's lashes and brows, Tom Lyle Williams watched in fascination as she performed what she called "a secret of the harem" - mixing petroleum jelly with coal dust and ash from a burnt cork and applying it to her lashes and brows. Mabel's simple beauty trick ignited Tom Lyle's imagination, and he started what would become a billion-dollar business, one that remains a viable American icon after nearly a century. He named it Maybelline in her honor.

Throughout the 20th century, the Maybelline company inflated, collapsed, endured, and thrived in tandem with the nation's upheavals, as did the family that nurtured it. Tom Lyle Williams - to avoid unwanted scrutiny of his private life - cloistered himself behind the gates of his Rudolph Valentino Villa and ran his empire from the shadows. Now, after nearly a century of silence, this true story celebrates the life of an American entrepreneur, a man forced to remain behind a mask, using his sister-in-law, Evelyn Boecher, to be his front.

This is an epic story and best-selling book. It is being considered for a four-part series made for television. To date, the book has been translated into four languages.

The Williams Family Saga and the Rise of Mabelline

Definitely, this is a very interesting story. It is the story of a self-made man and the role his family play in helping him build his/their business. It is fascinating to hear the historical details and how they affect the family and business. The Roaring 20s, Prohibition, Al Capone, World War II, Hollywood--all these events shaped both.

Both Tom Lyle and his sister-in-law Evelyn are determined and resourceful characters. It was fascinating to listen to their rises and their falls. With his burgeoning success, Tom becomes reclusive to hide his homosexuality. Evelyn is determined to be in the spotlight. Tom's life ends in death. Can Evelyn survive the con-men with designs on her life and wealth? This book has the feel of a well-written tell-all memoir of the rich and famous.

No, but she gives an excellent performance for this book.

How Money Destroyed A Family

I received this book free in exchange for an honest review.

The Maybelline Story packs lots of action and excitement. Loved it. The narration is excellent.

So fascinating I looked at the products again

I very much enjoyed this book. It was a fascinating tale about an american company and a family with all the good and foibles of us all. The performance was understated, which allowed the content to shine on its own strength. I'd recommend this to anyone who is interested in family drama and american business history. While I looked at the products again I cannot purchase them due to the animal testing in which they practice.

Would you listen to The Maybelline Story and the Spirited Family Dynasty Behind It again? Why?

I might, if only to make sure I didn't miss anything important! Such intrigue, and vibrant personalities.

Which character – as performed by Kerrie Seymour – was your favorite?

So hard to choose! Evelyn stands out to me even now as a strong woman for her time, and Kerrie really brings her decisions out without casting judgment through her reading.

Yes, I would recommend this book to a friend. It emphasizes the fact that success comes by hard work and belief in yourself.

This book is both fiction and non-fiction; part biography, part literature and part history. It weaves historical facts throughout the story to help ground you into the setting. It also has some literary elements to describe the action.

When Evelyn meets Preston and Tom Lyle. The description of the love triangle is engaging and makes you wonder who will get the girl. I like Evelyn's personality; a refined, torn, brass, intelligent woman.

This audiobook was provided by the author, narrator, or publisher at no cost in exchange for an unbiased review courtesy of AuidobookBlast dot com.

I really liked this book. It was so very interesting. Not at all the story of what I was expecting - turned out to be even better!!! If you're the slight bit interested on how companies are made, I highly recommend this book.

Finised it with in 48hrs. Very good Highly Recommended. I was surprised by the ending and you probably will be too.

The book should have been more aptly titled The Maybelline Queen as it centered more on one particular character and their viewpoint. Narration was terrible. Each time female narrator had to try to use a more masculine voice it was flat; devoid of any emotion though many sentences ended in exclamation marks, happy excitement and/or some form of sorrow. Book could have been much better with changes listed above since the inception and history of the Maybelline Company was revealed throughout.

Interesting what money does to people

Where does The Maybelline Story and the Spirited Family Dynasty Behind It rank among all the audiobooks you’ve listened to so far?

I enjoy biographies about successful businesses. So it was in the top 10

What was one of the most memorable moments of The Maybelline Story and the Spirited Family Dynasty Behind It?

She kept it lively.

Would have liked it to focus even more on Tom Lyle. He seemed like a genuine, decent, generous person.