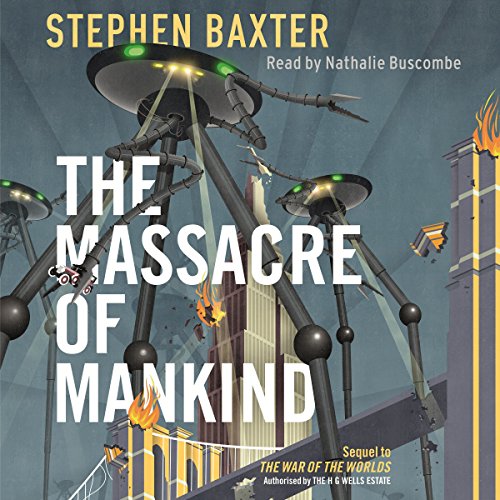 The Massacre of Mankind

By: Stephen Baxter
Narrated by: Nathalie Buscombe
Try for £0.00

It has been 14 years since the Martians invaded England. The world has moved on, always watching the skies but content that we know how to defeat the Martian menace.

Machinery looted from the abandoned capsules and war machines has led to technological leaps forward. The Martians are vulnerable to earth germs. The army is prepared. So when the signs of launches on Mars are seen, there seems little reason to worry. Unless you listen to one man, Walter Jenkins, the narrator of Wells' book. He is sure that the Martians have learned, adapted, understood their defeat. He is right.

Thrust into the chaos of a new invasion, a journalist - sister-in-law to Walter Jenkins - must survive, escape and report on the war. The Massacre of Mankind has begun.

What listeners say about The Massacre of Mankind

A fantastic opening to a genuine classic of the sci-fi genre. Whether you read it in the original or listened to Richard Burton's spine-tingling narration in the Jeff Wayne version it's a line and a story that has probably stayed with you ever since. So you have to wonder quite what was going through the minds of Stephen Baxter and Nathalie Buscombe when they took on the challenge of writing and narrating an officially sanctioned follow-up to H G Wells' "War of the Worlds".

In the case of Baxter he clearly saw it as the serious challenge it really is and he has produced a story that is stylistically and structurally sympathetic to the original. That's not surprising as he previously wrote "The Time Ships" which was also officially endorsed by the Wells estate as the sequel to "The Time Machine". This one reads like a book of its time but it is a very different version of the 1920s to the one that we know of. The Martian War of course altered history meaning that Britain never fought Germany in World War One leaving France to fall alone. The Kaiser has been appeased and it's a very sombre and darker Britain that we are introduced to.

Baxter weaves his story using many of the previous characters into his new reality. I was a little surprised to see a female narrator chosen but it certainly makes perfect sense as Baxter employs Julie Elphinstone from the original book to be his lead. Nathalie Buscombe does a really fine job of relaying the story which has a big cast to breathe life into.

Between them they have produced something that fits organically with the original story and characters. Baxter takes good care of them. This isn't modern sci-fi with huge sophistication, rather this is classic sci-fi and charmingly you still pick up some of the relative naiveté of the period it is set in. I would say that if you would genuinely enjoy reading or re-reading the original you'll also love this. If you are looking for a contemporary version of War of the Worlds it might not quite meet your needs so well.

For me nothing will ever quite match up to that chilling moment in a darkened bedroom when I first heard Burton utter that immortal opening line but this is a genuinely fine attempt to carry this classic story forwards.

I'm a big fan of Stephen Baxter and he doesn't disappoint with this audacious project. I thoroughly enjoyed reading this sequel and particularly loved his clever tweaks in an alternate history; following with the scientific knowledge around the time of writing the original War of the Worlds, creates the perfect universe to follow Wells' style.

If you enjoyed the original you will, I'm sure, enjoy this book.

a worthy sequel to the classic which expands brilliantly on its concepts and takes them to a logical conclusion. The story is only enhanced by the spot on narration by Nathalie Buscombe

very well read. Griping at points and going so deeply into the observations of the narrator as did the original. Poignant and at times totally horrifying. Has an almost steampunk view of the world whilst maintaining that Wellsian scientific model of the solar system that borders on fantastical yet is woven as a keen plot point as opposed to a nod of 19th century ignorance. overall a great listen and totally worth this month's credit.

The story is good but a lot of padding- several chapters repeat the story of Martian attacks on various cities ad nauseum. As a result the characterisation is sketchy at best- I couldn't relate to a single character.

The reader is a shocker tho. Her normal reading voice is pleasant but the endless pompous British public school accents grate. She speeds up and frankly the characters become indistinguishable- hard to finish book. This one is going straight to Audible refund.
Please Audible keep her away from public school accents!

Slow & rather dull with poor narrative.
HG Wells would not have approved of this.

I was expected great things from this, possibly too much as it turns out. It's woefully bereft of action, and some of the story lines almost seem tangential. It's more a story of life around WW1.
Wasn't a big fan of the narrator either. Most of the characters are male and the narrator can't really do old mens voices. Shame it couldn't have been Richard Burton 😊. The story is about three times longer than it needs to be

A true gem - Superb narration, great style and pace. Very respectful of the original book yet able to take us forward 20 years.

I wish I could've give this book 5 stars, unfortunately I reserve that pleasure to books who delivered certain things that this book hasn't.
Be as it may, this book was terrific, did a marvellous job imitating wells' writing style and imagination. Baxter definitely asked himself what would Wells do.
As if this book represents going into the untold stories inside the mind of Wells, but to say that would be a disservice to the true author of this great book.
Narration was ok, american accents were ridiculous, but bearable.