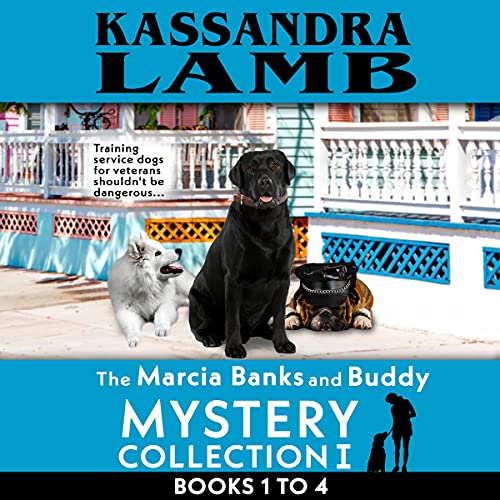 The Marcia Banks and Buddy Mystery Collection I: Books 1-4

By: Kassandra Lamb
Narrated by: Amy Deuchler
Try for £0.00

I’m a normal person. Well, I do have an unusual first name, pronounced Mar-see-a, not Marsha. And an abnormal vocation - I train service dogs for veterans with PTSD.

But otherwise I’m normal...Except I tend to get sucked into other people’s messes, which has led to my unusual avocation - amateur sleuth. Romp along with me and my four-legged best friend, Buddy through our first three big adventures, plus a bittersweet Christmas tale!

In To Kill a Labrador (no dogs die!), Marcia is called in to dog-sit her first trainee, a Black Labrador/Rottie mix named Buddy, when his former Marine owner is accused of murdering his wife. Outraged that his small town is assuming he's guilty, she sets out to uncover the real killer, despite the protests of the hunky local sheriff.

In Arsenic and Young Lacy, Marcia deals with a challenging client, a neurotic former Army nurse who's being stalked. When both sweet Lacy and Marcia are caught up in the stalker’s malicious orbit, she's torn. The young woman desperately needs her service dog, but how can Marcia put her dogs at risk? Not to mention herself...

In The Call of the Woof, Marcia’s former client, a motorcyclist and traumatic brain injury sufferer, is accused of robbery and murder. Marcia and Buddy set out to clear his name, fighting misconceptions about bikers and TBI along the way. Her boyfriend isn’t happy, though, that she’s putting herself at risk...again.

In A Mayfair Christmas Carol, Marcia's adopted town goes off the rails and decides to build an ice skating rink, in Florida. What could go wrong? Plenty! A decades-old skeleton is uncovered and its secrets threaten more than the town’s Christmas plans. Can Marcia and Buddy keep the ghost of Christmas past from destroying what's left of Mayfair’s founding family?

What listeners say about The Marcia Banks and Buddy Mystery Collection I: Books 1-4