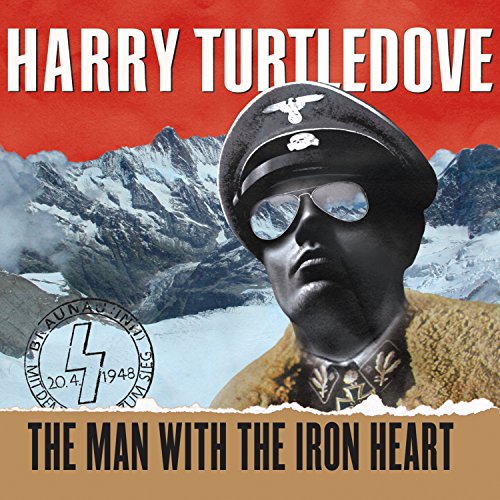 The Man with the Iron Heart

By: Harry Turtledove
Narrated by: William Dufris
Try for £0.00

In the real world, Reinhard Heydrich, the number-two man in the SS and an architect of the Holocaust, was assassinated in Czechoslovakia in May 1942. Eulogized by Hitler himself as "The Man with the Iron Heart", Heydrich - also known as "The Butcher" and "The Hangman" - was one of the most ruthless and calculating of the Nazi elite.

In The Man with the Iron Heart, Heydrich survives that fated assassination attempt, only to hatch an insurgency as insidious as anything conceived by Osama bin Laden, designed to keep the German battlefront alive long after the supposed end to hostilities. The Allies thought the war was over, but their problems are just beginning.

The Man with the Iron Heart is the gripping story of the hunt for Rienhard Heydrisch and of the effort to suppress urban guerrilla warfare 60 years before we really run into it in Iraq. Powerful and compelling, Turtledove has never been better.

"Turtledove is the standard bearer for alternate history." (USA Today)
"Turtledove never tires of exploring the paths not taken, bringing to his storytelling a prodigious knowledge of his subject." (Library Journal)

What listeners say about The Man with the Iron Heart

This was my first Harry Turtledove so I didn't really know what to expect. It pretty much does what it says on the tin in a workmanlike manner with very few, if any, surprises in the plot and fairly wooden characters. Frequently potty-mouthed but with no real toe-curling moments, it wasn't particularly difficult to listen to and passed the time on the daily commute but I can't honestly recommend it. If you're looking for alternative history I'd suggest you try Len Deighton's excellent SS-GB instead.

But the characters are quite boring because there is no twists or turns with anyone and everyone just follow there one characteristic.

I wanted to like this book more, as I I have read a lot of his other works and enjoyed them a lot. Really, I did. But unlike a lot of Turledove's books this one felt really heavy handed in the manner in which he overlaid post WW2 Germanywith contemporary events.

With the non-death of Reinhard Heydrich the Allies encounters a true opposition in post-defeat Germany. Heydrich has had 3 years to prepare for the downfall and subsequent resistance inside Germany. And to anyone who has followed the news in the past decade, every tool that Al Quada has deployed is in the arsenal of Heydrich's Werewolves. Suicide truck bombs, suicide bombers, IED's, other traps and even the kidnapping and execution of service members (caught on camera of course).

Maybe this book works for other people but I personally am exhausted from our own War against Terror that uses the same tactics, reading about them set into 1945-48 just felt like a chore.

A spellbinding read! It kept me engaged from beginning to end. I thoroughly enjoyed this unique look at history.

Thought-provoking, but just not all there

The idea that Turtledove puts forth here of a Nazi insurrection after VE Day is a great one, and it makes you re-think many of the events in Iraq and Afghanistan...Can you feel that we should not be in Iraq when we should have been in Germany...and that is the book's strength. Its weakness is the writing, which just gets groaningly bad at times. I wish it were better, the book takes so long to get where it's going, but it just didn't make it. But I thought long and hard about the ideas here, long after I finished the book.

Loved the story but was irked throughout its entirety with how the narrator would swap between saying N K V D and nkvayday. Would entirely derail my enjoyment until I settled back into it

The narration is good, but the voice acting of german/russian accents is distractingly bad.

I am in love with this book. The story is so incredibly phenomenal; the characters are great and quite funny with the brutality of the situations their in.
I don’t want to give too much away with this book, but there is a part at the end that made me want to stop reading altogether, however once I read past that part, my god how I just adored this book even more. It took just the right twist that I wanted but full heartedly did not expect; it was perfect.

Overall if you’re looking for a book where the Nazis win or have a chance to win, this is the book you want. Definitely my favorite book of all time.

I am so glad that Harry Turttledove is beginning to publish in audio and to Audible. Most of his works are simply masterful flights of the imagination into realms seldom so well tapped. This work is no different. Imagine Berlin and Baghdad mated together. The characters are so real...seldom can an author get me to empathize with them.

Perhaps I was expecting more character build up of RH versus what the book delivered.

It is not even close to being about RH which really confuses me, considering the title! It is mostly poor prose and cheeky dialogue. RH may have 10% of the book. The rest is how the Americans are doing at finding him.

I would not spend the time or money. Sorry. In fact, I am asking for my $$ back.

Less than I've come to expect from Turtledove

What disappointed you about The Man with the Iron Heart?

It unrealistically superimposed a 21st Century world view on an entirely different era.

What could Harry Turtledove have done to make this a more enjoyable book for you?

If he were going to replace one of histories' major players, I'd have liked to have seen him take down Hitler and replace him with someone equally evil, but smarter and more calculating. The paper hangers' basic nuttiness was, ironically, a real break for us.

I had no problem with it.

I can't believe that, on the heels of victory, the American people would have been so easily discouraged by Germanys' failure to immediately fold. This is the disheartening way that the current generation has reacted to the trouble in the middle east, which is a big part of why we're still having trouble there. In the wake of 9/11, I found myself wishing that, if the attack had to come, it'd been around 1948, when we were still the country that we used to be.